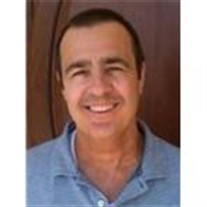 Paul Joseph Henry, 48, of Las Vegas, NV, passed away on Wednesday, December 14 after a valiant battle with cancer at the Stanford Medical Center. Paul was born on August 31, 1963 in Hartford, CT, to the late Archie and Rita (DiBenedetto) Henry. Shortly after his birth, the family moved to Methuen where Paul was active in sports and scouting. He attained the rank of Eagle Scout prior to entering Central Catholic High School in Lawrence from which he graduated in 1981. Paul then matriculated to the University of Massachusetts, Amherst, from which he graduated with a BS degree in Industrial Engineering in 1985. After a brief stint as an engineer with the Western Electric company, Paul was accepted to the George Washington University Law School in Washington D.C. and graduated in 1989. Paul was admitted to the bar in both Washington D.C. and Massachusetts and began practicing law as an associate with the firm of Manatt, Phelps & Phillips, LLP in Washington. Paul?s passion for public service led him to the position of General Counsel to the US Senate Environment & Public Works Committee under US Senator Harry Reid. In 1996, Senator Reid tapped Paul to oversee his reelection campaign in Southern Nevada. In 1998, a victory by 428 votes was won in an increasingly conservative state of Nevada. After just two years in his new home state, Paul was elected the Nevada State Democratic Party Chairperson, a role he served for two terms. Paul also became involved in several Nevada charities including the March of Dimes. It was at this fundraiser in 2001 that he met his wife Diane Lipscomb. Over the next few years, Paul?s business interests shifted to the world of finance. He was involved in the start-up of several companies in the internet, biotech and home health fields while maintaining an active interest in the political activities of Nevada. Paul was widely known for his outgoing nature and interpersonal generosity. Over the years, his touch has affected the lives of many. Even in his last days, he reached out and spoke to those whom he felt were hurting. This was driven by his dedication to God. As a seeker of knowledge, he explored his faith and sought spiritual enlightenment and growth. He was a great source of optimism during his illness, and a bright light for others to follow. Paul is survived by his wife Diane Lipscomb, MD and two daughters, Alexandra Marie and Katherine Grace; his brother, Michael and his wife Dorothy and their children Paul Henry II, Nicole, and Michael Jr. Paul was a loving uncle to 6 nieces and nephews. He will be remembered fondly by countless close friends. A memorial service will be held on Tuesday, December 27, 2011 at 12 noon at The Church at South Las Vegas, 3051 West Horizon Ridge Parkway, Henderson, Nevada 89052. A reception will follow at the Henry?s home. ARRANGEMENTS: Family and friends may call on Thursday January 5, 2012 from 4:00p.m. ? 8:00p.m. at the Kenneth H. Pollard Funeral Home, Inc., 233 Lawrence Street Methuen, MA 01844. Funeral Mass will be celebrated on Friday January 6, 2012 at 10:30a.m. in St. Monica?s Church 212 Lawrence St. in Methuen, MA. Interment will follow in the Elmwood Cemetery on North Lowell St. also in Methuen, MA. The family and friends of Paul have decided to create the ?Henry Family Trust? to support the educational pursuits of his two young daughters. Donations to the fund may be sent in c/o The Oldaker Law Group, 818 Connecticut Avenue, NW, Suite 1100, Washington, DC 20006. For directions or condolences please visit www.pollardfuneralhome.com

Paul Joseph Henry, 48, of Las Vegas, NV, passed away on Wednesday, December 14 after a valiant battle with cancer at the Stanford Medical Center. Paul was born on August 31, 1963 in Hartford, CT, to the late Archie and Rita (DiBenedetto)... View Obituary & Service Information

The family of Paul J. Henry created this Life Tributes page to make it easy to share your memories.