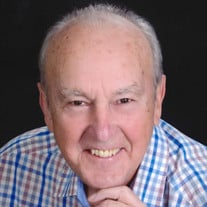 Salem, NH - Paul E. Becotte, 86, of Salem, NH, passed away on November 30, 2018 in Pinellas Park, FL and rejoined his nine brothers and sisters in Heaven. He was the beloved husband of Geneva Everhart Becotte, to whom he was married for 14 years. Born in Lawrence, MA on December 6, 1931, he was the son of William and Mabel (Dumont) Becotte. In spite of being born and raised during America’s Great Depression, he went on to live the American Dream: he graduated from Lawrence High School and then earned his Bachelor of Science in Business Administration from Merrimack College in North Andover. He proudly served his country in the U.S. Navy during the Korean War on the destroyer USS Furse. He got a job and went to school nights to better himself. He worked as an engineer at Raytheon Co. in Andover for 35 years. He bought a home and raised a family. He found love and happiness again with Geneva until his final minute. His life truly was a life well lived. Paul was a wonderful, social, friendly, family man. He enjoyed the New England Patriots, playing the 45’s card game, and loved listening to his music. He was a former member of the Derry-Salem Elks #2226 and the American Legion Post 63 in Salem, NH. Paul will be deeply missed by all those who loved him including his wife, Geneva; 3 children, Billy Becotte and his wife, Justine of Londonderry, NH, Dennis Becotte and his wife, Janet of Merrimack, NH, and Charlene Arbour and her husband, Greg of Merrimack, NH; Geneva’s children, Laura Everhart of Lowell, MA and Loren Everhart and his wife, Tina of Shelby, NC; 5 grandchildren, Paul, Sara, Edward, Michael, and Audra; 3 great-grandchildren, Adalie, Rhett, and Lori; and several nieces and nephews. Family and friends will honor and celebrate Paul’s life by gathering for his calling hours on Sunday, December 9, 2018 from 3 – 6 pm at the Kenneth H. Pollard Funeral Home, 233 Lawrence Street, Methuen. His Funeral Mass will take place on Monday at 9 AM at Mary Queen of Peace Church, 200 Lawrence Road, Salem, NH. Guests are kindly asked to meet directly at the church. Burial will be private and at the convenience of the family. In lieu of flowers, memorial contributions can be made to Suncoast Hospice Foundation, 5771 Roosevelt Blvd, Clearwater, FL 33760. To send a condolence to Paul’s family, please visit www.pollardfuneralhome.com. The Kenneth H. Pollard Funeral Home is honored to serve the Becotte family.

Salem, NH - Paul E. Becotte, 86, of Salem, NH, passed away on November 30, 2018 in Pinellas Park, FL and rejoined his nine brothers and sisters in Heaven. He was the beloved husband of Geneva Everhart Becotte, to whom he was married for 14... View Obituary & Service Information

The family of Paul E. Becotte created this Life Tributes page to make it easy to share your memories.