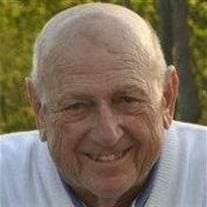 Mr. Patrick Bissonnette (Gramps), 91, of Salisbury died peacefully on Wednesday, September 26 at Brigham and Women’s Hospital after a brief illness. He was surrounded by his 4 daughters and his wife of 71 years Pauline (Hamel) Bissonnette. Pat was born in Biddeford, Maine in 1927, son of Albert and Rose (Binette) and was the adopted son of Alice (Bissonnette) and Alfred Bedard. He attended elementary school at Sacred Heart School in Lawrence and graduated from Punchard High School in Andover. Pat was an honorably discharged veteran having served his country during World War II as a member of the United States Coast Guard aboard the USS Wakefield. After his discharge from the Coast Guard he worked for the Andover Townsman and the Eagle Tribune Printing Company. In February 1950, he founded the Town Printing Company in Andover with his brother-in-law George Durant. He operated the business until September 1980 when he sold it to his daughter Carol and her husband Charles Poor. The company is still in operation today and is known as Flagship Press in North Andover. Pat lived in Lawrence for most of his life and was a member of Sacred Heart Parish. He served the City of Lawrence on the License Commission for 8 years, two years as the Chairman. He was an honorary member of the Lawrence Council 67 Knights of Columbus and a 4th degree of the Father O’Donnell assembly since 1960. Since 1974 he has been a member of the Lawrence Lodge of Elks serving on the House Committee and as Esquire for 4 years. He was also a member of the Ft. Myers Beach, Florida, VFW Post 10097 since 1977 and the American Legion Post 274 of Fort Myers Beach. Since 1977 Pat has spent his winters in Ft. Myers Beach, Florida and summers in Salisbury Beach, MA, where he is a member of Star of the Sea Parish. He enjoyed boating, playing golf and his favorite card game, 45’s. He is survived by his wife Pauline (Hamel) Bissonnette and four daughters – Carol Poor and her husband Charles of Tuftonboro, NH and Jupiter, Florida; Gail Steele and her husband Joe of Westminster, MA; Lynne Snow and her husband Donald of Londonderry, NH and Kim Baltier and her husband Mark of Chelmsford. He has eight grandchildren – Jeff Poor, Chris Poor, Greg Poor, Hillary Minicucci, Patrick Snow, Taylor Hodge, Kurt Baltier and Kendra Baltier; and 11 great-grandchildren – Ryan Poor, Kaitlyn Poor, Lauren Poor, Charlie Poor, Giselle Poor, Cameron Poor, Tanner Poor, Cole Minicucci, Quinn Minicucci, Chase Minicucci and Evelynne Hodge. He is also survived by his brother Leo Bissonnette and sister Theresa Bissonnette. Friends and family are cordially invited to attend visitation for Patrick on Sunday, September 30, 2018 from 1 – 5 PM at the Kenneth H. Pollard Funeral Home, 233 Lawrence St, Methuen. A Mass of Christian Burial will be celebrated on Monday, October 1, 2018 at 11:30 AM at St. Michael’s Church, 196 Main Street, North Andover, MA 01845. Interment to follow at St. Mary-Immaculate Conception Cemetery, 29 Barker Street in Lawrence, MA. In lieu of flowers, please make a donation in Patrick’s memory to The Organization for Autism Research (OAR) at www.researchautism.org ; St. Jude’s Children’s Hospital at www.stjude.org or Els for Autism at www.elsforautism.org. The Kenneth H. Pollard Funeral Home is honored to serve the Bissonnette family.

Mr. Patrick Bissonnette (Gramps), 91, of Salisbury died peacefully on Wednesday, September 26 at Brigham and Women&#8217;s Hospital after a brief illness. He was surrounded by his 4 daughters and his wife of 71 years Pauline (Hamel) Bissonnette.... View Obituary & Service Information

The family of Patrick A. Bissonnette created this Life Tributes page to make it easy to share your memories.