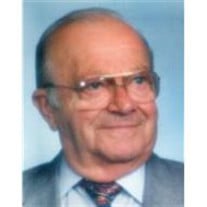 Lawrence, MA- Michael ?Mike the Mailman? ?Mickey? Ciardello Sr. 91, died peacefully Sunday August 17th at his home surrounded by his family. Mickey was a life long resident of Lawrence, born to Jennaro and Margarite (Cimino) Ciardello. Mike was the husband of the late Joanne (Rossi) Ciardello who died in October of 2003, with whom he was married for 60 years. Educated in Lawrence schools and a graduate of Lawrence High school, Mickey attended Northeastern University. He was originally employed as a meat cutter. He was later employed by The US Postal Service in Lawrence as a letter carrier for 28 years, before his retirement in 1980. He was a veteran of the United States Army where he served his country World War II. He was a member of the Knights of Columbus #4027 in Methuen, member of the Rainbow Club and part of the ?Mall? gang. He was an avid golfer and enjoyed cooking at the Assumption Church in Lawrence for over 50 years. He is survived by his sons, Jerry Ciardello and his companion Patricia Cameron of Salem NH, Michael Ciardello Jr. of Methuen, his two daughters Joanne and Margaret ?Maggie? both of Lawrence, granddaughters Maureen Moeckel and her husband John of Salem, NH, Jennifer Gingras and her husband Craig of Londonderry, NH and three great grandchildren, Joscelyn, John and Ryan. He is also survived by his two sister-in laws, Jenny, wife of the late John Ciardello, and Antoinette, wife of the late John Brox, as well as several nieces and nephews. He was the Brother of the Late Mary McDonald and the late Rose Crucius. Mickey loved spending time with his friends and family and will be sadly missed. ARRANGEMENTS: Family and friends may call on Thursday, August 21, 2008 from 4-8 PM at Kenneth H. Pollard Funeral Home 233 Lawrence St. Methuen, MA. A mass of Christian Burial will take place Friday, August 22 at 10:30AM at St. Monica?s Church. Burial will take place at the convenience of the family. As an expression of sympathy, memorial contributions may be sent to the American Diabetes Association 330 Congress St., 5th floor Boston, MA 02210 or the American Heart Association, New England Affiliate, Inc., 20 Speen St. Framingham, MA 01701. For online condolences, please visit www.pollardfuneralhome.com

The family of Michael "Mickey" Ciardello created this Life Tributes page to make it easy to share your memories.