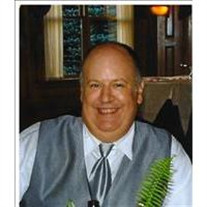 Michael J. Perrault Jr., 50 of South Lawrence passed way surrounded by his loving family on March 20, 2015 at the Merrimack Valley Hospice House. Michael was born on March 9, 1965 in Lawrence. From a very young age, Michael took a great liking to all things related to any Boston sports teams. His biggest passion was for his beloved Boston Red Sox. For over thirty years in April, Michael could be found at Red Sox Opening Day. Opening Day brought Michael great joy because as a die-hard Red Sox fan, no matter what had happened the previous season, Michael always looked to Opening Day as a new page in the team?s storied history. He was a long time member of the Lawrence B.P.O.E. # 65. He also enjoyed trips to Florida to golf and hang out at the beach on a great sunny day with his father Michael Sr. Michael was a very generous soul, always donating both time and money to friends and charities. Michael was the loving son Michael J. Perrault Sr. of Lincoln, NH and the late Joyce (Seguin) Perrault. He was the dear brother of Kevin Perrault and his wife Cheryl of Salem, NH and Kristen Paolino and her husband Jamie of South Lawrence. Michael was the cherished uncle of Petra and Olivia Perrault both of Salem, NH. He will be fondly remembered by his close group of friends at The Catcher?s Mitt of Lowell. Friends and guests are invited to call on Tuesday, March 24, 2015 at 4:00 PM until 8:00 PM at the Kenneth H. Pollard Funeral Home, 233 Lawrence St. Methuen. A mass of Christian Burial will take place on Wednesday, March 25, 2015 at 11:00 AM St. Patrick?s Church, Broadway South Lawrence. Interment to follow at a later date. In keeping with Michael?s generosity and passion for the Boston Red Sox, in lieu of flowers, donations in Michael?s memory may be made to the Jimmy Fund, PO Box 849168 Boston, MA 02284. For directions and online guestbook, please visit the funeral home website, www.pollardfuneralhome.com. The Kenneth H. Pollard Funeral Home is honored to serve the Perrault Family.

The family of Michael J. Perrault Jr. created this Life Tributes page to make it easy to share your memories.