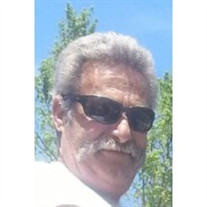 Michael J Medugno, 65 of Methuen, passed away February 12, 2017 surrounded by his devoted family at the Lawrence General Hospital. Michael was born on November 4, 1951. After graduating with the Class of 1971 from Tenney High School, he served in the United States Air Force during the Vietnam War. Michael was the former Vice Commander of the American Legion Post 122 in Methuen. He worked for many years until his retirement with the Essex Bituminous Paving Company. Michael was a truly devoted Boston sports fan, who additionally loved the quiet joys of fishing. He was a devoted family man who loved his children and grandchildren. His life touched many and he will truly be missed Michael is survived by his loving father Emilio Medugno and his wife Dawn of Methuen, and his mother, Jeanette Siragano of Malden. He was the devoted father to his two children; his daughter, Courtney M. Medugno of Methuen, and his son, Michael J. Medugno, Jr. of Methuen. Michael was the grandfather to his two grandchildren; Shane Griffiths and Madison Medugno, both of Methuen. Michael is also survived by his four brothers and six sisters; Emilio V. Medugno and his wife Angela, Cheryl Dubois and her husband Albert, Rita Ann Reynolds and her husband Roger, Sharon Merril and her husband Daniel, Christopher Medugno and his wife Debra, Mark Medugno, Dawn Medugno and her husband Denny Curtis, Danielle Medugno, Carol Murphy and her husband Larry, and John Shea and his wife Lynn. Michael is also survived by many loving nieces and nephews. He was predeceased by his three brothers; Nicholas Medugno, Carmen Medugno and Curt Medugno. Visitation for Michael will be held Friday, February 17, 2017 from 4:00 ? 7:30 PM at the Kenneth H. Pollard Funeral Home, 233 Lawrence Street, Methuen, MA. A funeral service will be held immediately after visitation. Services will conclude with military honors rendered by the United States Air Force. Friends and family are cordially invited to attend. To honor Michael?s wishes interment will be private. Online condolences can be given at http://www.pollardfuneralhome.com. The Kenneth H. Pollard Funeral Home is proud to serve the Medugno family.

Michael J Medugno, 65 of Methuen, passed away February 12, 2017 surrounded by his devoted family at the Lawrence General Hospital. Michael was born on November 4, 1951. After graduating with the Class of 1971 from Tenney High School, he... View Obituary & Service Information

The family of Michael J. Medugno created this Life Tributes page to make it easy to share your memories.