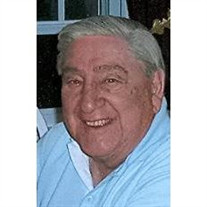 Florida & Methuen, MA ? Maurice W. ? Moe? Desrochers, 84 yrs of age died October 12, 2011 after a courageous battle with cancer surrounded by his family. Born in Methuen, September 15, 1927 Maurice was the son of Emile and Florida (Cote) Desrochers. A longtime resident of Methuen before moving to Port Charlotte Florida, Moe had been a foreman in charge of Water Maintenance for the City of Methuen?s Water Department for 37 years. During World War II he served his country in the United States Army prior to his honorable discharge at the end of the war. Maurice was in the Army Reserves for 21 years and served during the Cuban Crisis of 1962. Maurice was also Past Commander of the Arnold Greenwood Post # 8349 VFW (Veterans of Foreign Wars). Mary and Moe enjoyed visiting casinos across the USA with their children. They enjoyed traveling to Europe and Hawaii, Caribbean Cruises, and experienced four cross country trips in their RV. Besides his wife, Mary, Maurice is survived by nine children and their spouses, Barbara and James Pelletier, Carolyn Pray, James and Barbara Desrochers, Larry Desrochers, Linda Hughes and Keith Wheeler, Karen and Phil Keon, Mary Ann and Ed Wright, Maureen and Brian Freeman, and Maurice Desrochers Jr., two Sisters and their spouses, Carline and Arthur Dauteuil and Doria and Albert Fiorante, 20 Grandchildren, 23 Great Grandchildren, and his best friends Harold and Dorothy Johnson of Methuen. A Funeral Mass will take place on Monday at 9AM in Saint Monica?s Church in Methuen. Friends will be warmly received on Sunday from 1 to 5 PM at the Kenneth H. Pollard Funeral Home, Inc., 233 Lawrence Street in Methuen. In lieu of flowers, the family has asked for donations to the American Breast Cancer Foundation, 1220 B East Joppa Road, Baltimore, MD 21286. For directions and to send online condolences please visit

The family of Maurice W. ? Moe? Desrochers created this Life Tributes page to make it easy to share your memories.