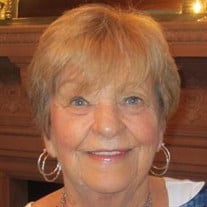 Maureen (Moynihan) McGovern, 76, of Salem, NH passed away peacefully at home surrounded by her devoted family on October 23, 2017. Maureen, daughter of Daniel F. and Agnes B.(Timony) Moynihan, was born on June 17, 1941, in Methuen, MA. Raised and educated in Methuen, she graduated from Tenney High School with the Class of 1960. After lovingly raising and educating her children, Maureen fulfilled her own dreams by earning her college degree at Northern Essex Community College and becoming a licensed registered nurse. After many years of selfless and compassionate service, she last worked and retired from Mary Immaculate Nursing Home in Lawrence, MA. Maureen was kind, genuine and devoted to her family and friends. She was a deeply loved and cherished mother, grandmother, sister, aunt, great-aunt and friend. She was the matriarch of her family and was known for her honesty, integrity, and kind generosity. Maureen would give you whatever you needed without hesitation and was always willing to listen and offer advice. She enjoyed playing bingo and 45’s while chatting with friends, traveling with her granddaughters, and watching the Red Sox and the Patriots. Maureen never missed an episode of Jeopardy or Wheel of Fortune. She touched many lives in many different circles and she will be forever missed and fondly remembered. Maureen was the beloved mother to her four children; her sons, William McGovern Jr of Lawrence, MA, Michael McGovern of Biddeford, Maine, and Stephen McGovern of Pasadena, TX, and her daughter, Colleen Langseth and her husband Scott, of Houston, TX. She was the proud Nana of her twin granddaughters, Abagail and Anastasia Langseth. Maureen was the loving sister to her three siblings; her brother, Michael Moynihan and his wife Bonnie of St. Mary’s, GA, her brother, Daniel F. Moynihan Jr. and his wife Carolyn of Windham, NH, and her sister, Linda Kolifrath of Salem, NH. She was also the loved “Aunty Maureen’ to her many nieces, nephews, great nieces and great nephews. She is survived by her former husband William McGovern Sr. In addition to her parents, Maureen was preceded in death by her brother-in-law David Kolifrath and her niece Melissa Kolifrath. Friends and family are cordially invited to attend a Celebration of Life in Maureen’s honor at the Searles Castle At Windham, 23 Searles Rd, Windham, NH on Monday, November 20, 2017 at 6:00 PM. In lieu of flowers, contributions can be made in Maureen’s memory to Dana-Farber Cancer Institute, P.O. Box 849168, Boston, MA 02284. To leave an online condolence, please visit www.pollardfuneralhome.com. The Kenneth H. Pollard Funeral is proud to serve the family of Maureen McGovern.

The family of Maureen McGovern (nee Moynihan) created this Life Tributes page to make it easy to share your memories.