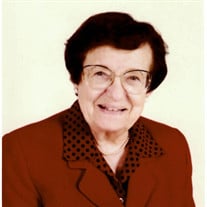 Maryanne T. “Doris” (Brien) Amaya, 87, of Lawrence, MA, passed away on April 18, 2021 at Cedar View Rehabilitation in Methuen. She was one of twelve children, born on July 29, 1933 in Lawrence, Massachusetts, to the late Alfred and Yvonne (Lavalle) Brien. After graduating Sacred Heart High School in South Lawrence, she was called to join the Marist Sisters. Growing up in a very musical family, Doris loved music herself and became a talented singer. Her favorite opera was Carmen. In the late 1950’s Doris was sent to Lima, Peru, with the Missionary Sisters of the Society of Mary. There she became the Mother Superior of a Catholic school for children. About fifteen years later, Doris left the convent and returned to Massachusetts where she attended Boston College. She graduated summa cum laude with joint master’s degrees in Education and Psychology. She formed a private practice and focused her career on clients with addiction issues. She initially worked in Houston, Texas, and later moved to Miami, Florida, where she became recognized as an expert in her field. Doris traveled frequently to South America, Panama and the Caribbean Islands, where she led training programs for the White Cross. She wrote a book for the Latin American community about addiction published in 1991 titled Sepa todo sobre adicciones (Know All About Addictions). In honor of her work on addiction with the Latin American community, Doris became a finalist for a national award in the 1980’s along with former First Lady Betty Ford and best-selling author Melody Beattie. Recently, she moved to Lawrence, Massachusetts to be closer to family. Doris Amaya was a brilliant, big-hearted, hard working woman who dedicated her life to helping others. Many people’s lives have been touched by her kindness and intelligence. She is survived by her husband, George Amaya; her sister, Agnes Bardwell and her husband, Michael of Methuen; brothers, Arthur Brien of Lawrence, Albert Brien of Kingston, N.H., Sidney Brien of Cambridge. In addition, she also leaves behind numerous nieces and nephews. A Mass of Christian Burial will take place on Saturday, May 15, 2021 at 11:00 AM at Our Lady of Good Counsel, 22 Plymouth Street in Methuen. In lieu of flowers, please send donations to the Brother Simeon Scholarship Fund at Central Catholic High School in Lawrence, MA. The Kenneth H. Pollard Funeral Home is honored to serve the Amaya Family.

The family of Maryanne D. Amaya created this Life Tributes page to make it easy to share your memories.