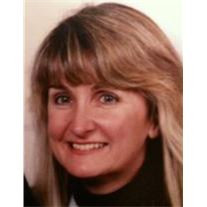 Andover ? A compassionate heart of gold stopped beating. Mary Lou Sullivan, 56, of Andover, MA, passed away Tuesday, February 11, 2014. Mary Lou was born to Patricia (Gemmell) Sullivan and the late John Terrance Sullivan in Methuen, MA, on July 26, 1957. Mary Lou graduated from St. Patrick?s Grammar School, Lawrence, Andover High class of 1975, Katherine Gibbs Business School of Boston and worked as a legal secretary for awhile before and during her pursuit of a Bachelor of Science in Management Information Systems from the University of Lowell. She worked for over twenty-five years as a Business Development Representative, Manager of Technical Support and in Corporate Sales. In 2001, Mary Lou fulfilled her lifelong dream of becoming a mother. She travelled, with her own mother, to China and adopted her daughter, Nicole Sullivan. Less than a year later she started proceedings to find a sister for Nicole. In 2004 she returned to China, this time with her father, and brought her second daughter, Victoria Sullivan home completing her family. Mary Lou will be lovingly remembered by her daughters, Nicole and Victoria Sullivan; her sister, Kathleen S. and husband, Rick Dube, of Andover and her three brothers and sisters-in-law, J. Terrance ?Terry? and Susan Sullivan of Derry, NH, Tom and Penny Sullivan of Marion, MA, Tim and Cindy (Garland) Sullivan of Andover, MA; and her nieces, Heather, Patricia, Kelly, Ann, Laura Sullivan, and Kristin Dube; and nephew, Richard (Chad) Dube; several aunts, uncles and cousins. She was the loving daughter of the late J. Terrance ?Terry? Sullivan Sr. and sister of the late Steven P. Sullivan. ARRANGEMENTS: At the family's request services will be private. In lieu of flowers, donations can be made to the Children?s Trust u/ML Sullivan Revocable Trust in care of Pilgrim Bank, 350 Front St., Marion, MA 02738. Share memories and sign her condolences guest book at www.pollardfuneralhome.com. The Pollard Funeral Home is honored to be assisting the Sullivan family with arrangements.

The family of Mary Lou Sullivan created this Life Tributes page to make it easy to share your memories.