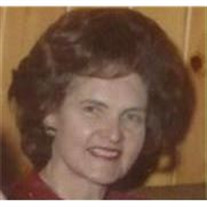 Marjorie (Jones) Lodge passed away on March 11, 2015, surrounded by her loving family. Marjorie was born on July 5, 1928 to Maurice and Annie (Crossley) Jones. She attended the Methuen public schools, graduating from Edward F. Searles High School in 1945 as Ivy Orator and Class Poet. Marjorie won a competitive four year full tuition scholarship to Bates College, Lewiston, Maine, where she majored in Chemistry and Pre-Med. After college, Marjorie married Alfred Speed Lodge, who passed away in 1994, and they raised their three children in Methuen. Mrs. Lodge was extremely involved in her children?s school and after school activities. She was a Brownie leader, a Girl Scout leader, room mother and an active member of the Stephen Barker PTA, encouraging her children in sports and majorettes, as well as academic pursuits. In the 1950?s and early 1960?s, Mrs. Lodge was associated with her husband in the real estate business as a member of the Greater Lawrence Board of Realtors. She later worked as a substitute teacher and as a banker. Marjorie?s career with the Internal Revenue Service began in 1968, when her youngest child started school. She worked at both the Andover and Methuen offices, starting as a seasonal tax examiner and culminating her career as a manager. She retired in 1990. Marge and Al enjoyed vacationing in Florida, Las Vegas, Lake Winnipesaukee, Long Lake and York Beach, Maine. However, the greatest joy of their lives was their family; time spent with the children and grandchildren was precious. In fact, having been an only child, Marjorie considered being the matriarch of such a large family the biggest accomplishment of her life. Marge belonged to the Andover Service Center Retirees Association, the Bates College Alumni Association, and her high school class reunion committee. Marjorie is survived by daughters, Valerie (Lodge) and George Duffield, Kimberly (Lodge) and Michael Walters; son, Stephen and Mary (Woods) Lodge. Grandchildren: Andrea and Chris Hanle, Melissa and Lee Parnell, Caitlin and Sam Weinstein, Jeffrey and Martha Duffield, and Owen Lodge and nine great-grandchildren. Brother in law John Lodge and his wife Polly of Maine and several nieces and nephews. Marjorie also leaves a close family friend of many years, Donald Rose. The family wishes to thank the nurses in the St. Camillus Unit at Holy Family Hospital for their care and kindness, especially Beth, Kara and Sonia. Funeral arrangements are private. In lieu of flowers, contributions can be made to the American Heart Association PO Box 417005 Boston MA 02241 or the National Multiple Sclerosis Society 101A First Ave. Waltham MA 02451. To leave the family online condolences please feel free to visit www.pollardfuneralhome.com. The Kenneth H. Pollard Funeral Home is honored to be assisting the Lodge family through this difficult time.

The family of Marjorie Lodge created this Life Tributes page to make it easy to share your memories.