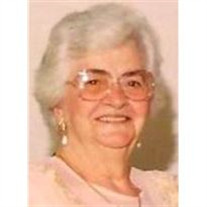 Salem, NH- Maria L. (Silva) Faria, 93, died September 24, 2010 at her home surrounded by her loving family. Born in Azores, Portugal on October 2nd 1916, Maria was the daughter of Jose and Ana (Etelvina) Silva. She immigrated with her family from Portugal on December 3rd 1959 to Lowell and then moved to Lawrence in 1964. While in Lawrence, Maria worked in the Lawrence Mills and Grecco Brother clothing. Maria was a wonderful mother and took pride in raising and caring for her family. She loved to cook and was known for her sweet bread. She was very talented at crocheting and crocheted many beautiful table cloths. Maria was a woman of strong faith in her Catholic religion and to Our Lady of Fatima. She was a parishioner of Sts. Peter and Paul and Corpus Cristi parish in Lawrence. The widow of the late Jose Avila Faria with whom she shared 57 years of marriage, Maria is survived and will be deeply missed by her children, Jack Faria and his wife Julietta of Pelham, NH, Maria Barcelos-Bettencourt and her husband Duarte of Salem, NH, 8 grandchildren, Joseph C. Barcelos and his wife Maria (Sideri), Roberto M. Barcelos and his wife Teresa (DaSilva), Teresa M. Zingales and her husband Joe, Daniel J. Barcelos and his wife Amy (Yameen), CarolAnn Gullage and her husband Terry, Diana Paquette and her husband Brian, Susana Faria and fiance Greg, and Cristina Faria. She is also survived by her 16 beloved great-grandchildren. She was pre-deceased by her son-in-law Carlos Barcelos, who died in 1992. ARRANGEMENTS: Relatives and friends are invited to pay their respect on Monday, September 27th from 4-8 pm at the Kenneth H. Pollard funeral Home 233 Lawrence St., Methuen, MA. A Mass of Christian Burial will take place on Tuesday morning at 10 am at Corpus Cristi Parish the former Holy Rosary Church in Lawrence with burial to follow at Immaculate Conception Cemetery. Donations in Maria's name may be made to Merrimack Valley Hospice, 360 Merrimack St. Lawrence MA, 01843 www.merrimackvalleyhospice.org For directions and to leave an online condolence, story or message please visit www.pollardfuneralhome.com

Salem, NH- Maria L. (Silva) Faria, 93, died September 24, 2010 at her home surrounded by her loving family. Born in Azores, Portugal on October 2nd 1916, Maria was the daughter of Jose and Ana (Etelvina) Silva. She immigrated with her family... View Obituary & Service Information

The family of Maria Faria created this Life Tributes page to make it easy to share your memories.