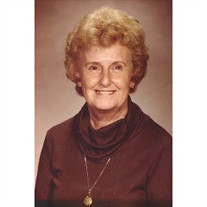 Methuen ? Margaret (Casey) Cunningham, 93, of Methuen, passed away on December 28, 2016, after a brief illness. Peg was the wife of Robert Cunningham with whom she shared 28 years of marriage who passed in 2015. Born and raised in Lawrence, MA, she was one of five children born to Michael and Johanna (Sullivan) Casey. She graduated from St. Mary?s High School in 1940 and went on to graduate from the McIntosh School of Business a year later. Margaret was employed by the US Treasury Department, Internal Revenue Service for 33 years. During that time she joined a group of ?travelers? which enabled her to travel to several countries outside of the United States. Travelling in the United States was what she enjoyed the most. Relocating to Danvers with her husband, Bob, in 1987 opened the chapter in her life of becoming the ?walking lady.? She was often seen walking the streets of Danvers. Margaret is survived by three daughters: Sheila Cunningham of Methuen, Eileen Gilbert of Methuen, with whom she lived, and Barbara Fleming and her husband, Brian, of Townsend, MA. She also leaves behind her brother, James Casey of East Falmouth, MA, five grandchildren, seven great grandchildren, and several nieces and nephews. Margaret was predeceased by her first husband, Edwin of 30 years and their son Thomas along with her siblings, John Casey, Catherine Shea and Mary Seed. Margaret?s wake will be held, Saturday December 31, 2016 from 9:30 ? 10:30 AM at the Kenneth H. Pollard Funeral Home, 233 Lawrence St., Methuen, followed by a Mass of Christian Burial at 11 am at St. Monica?s Church, 212 Lawrence Street, Methuen. Burial will be private. In lieu of flowers, Margaret has requested that donations be made to the Doug Flutie Jr. Foundation for Autism, 1001 Worcester Road, Framingham, MA 01701. The Kenneth H. Pollard Funeral Home is honored to serve the Cunningham Family.

Methuen ? Margaret (Casey) Cunningham, 93, of Methuen, passed away on December 28, 2016, after a brief illness. Peg was the wife of Robert Cunningham with whom she shared 28 years of marriage who passed in 2015. Born and raised in Lawrence,... View Obituary & Service Information

The family of Margaret Cunningham created this Life Tributes page to make it easy to share your memories.