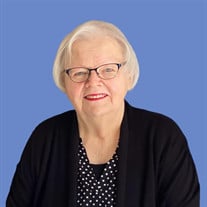 Madeline (Broaca) Varitimos, 82, of Methuen, passed away peacefully after a short period of declining health at High Pointe Hospice House on Tuesday, August 24, 2021. Madeline was born in Lawrence, MA, daughter of the late Victor and Stephanie (Orpel) Broaca. She attended St. Laurence O’Toole and was a proud member of Lawrence High School, Class of 1957, later coordinating and attending many reunions with dear classmates. Madeline attended Merrimack College, and later also took several accounting classes at the University of Massachusetts, Lowell. She was President and CEO of Hi-Ridge Manufacturing, worked for many years for the Methuen Public School Department, and retired from working life as Executive Assistant for the City of Methuen. Madeline also cherished her role as business partner in Madeline & Pollard, a clothing boutique in Andover. Much of Madeline’s personal and professional life was dedicated to community activism and service. She took great joy in helping others, dedicating herself to improving her adopted hometown of Methuen. Madeline turned her passion for historic preservation into a role as a founding member of the Tenney Preservation Association (now the Methuen Historical Society), whose slogan was “Tenney for the Town!” It was thanks to her tireless advocacy, organization, and work in the early 1980s to mobilize residents and government to save the former Tenney Estate (now Grey Court Park and the Tenney Gatehouse) that these beloved treasures are still here for us to enjoy today. Madeline served on the City of Methuen’s Historic District Commission, Conservation Commission, and Edwin J. Castle Fund, and was most recently Chairwoman of the Board of Registrars. She was also a member of the Friends of the Nevins Library and a long-time supporter and volunteer at the Methuen Festival of Trees. As well, Madeline gave her time to the Board of the Stephen Barker PTO. She was also known for being quick to lend a hand, and was a regular in Massachusetts Democratic circles. A “volunteer’s volunteer,” she was forever knocking on doors, leading phone banks, and arguing passionately with friends, family, and strangers about the issues of the day. Despite being required to stay neutral as a leader in the local chapter of the League of Women Voters, it was nearly impossible for Madeline to hide her beliefs about why everyone should support and vote for the Democratic Party. She attended local and state-wide caucuses and was named Democrat of the Year in 1996. She served on the Commonwealth’s Energy Facilities Siting Council at the appointment of Governor Michael Dukakis. Faith was central to Madeline’s life. After converting to Greek Orthodoxy in 1968, she became President of the Sts. Constantine and Helen Greek Orthodox Church Sunday School program, where she also volunteered as a teacher. She served as Treasurer of the Ladies Philoptochos for many years. Proud of her Polish and Lithuanian heritage, she nonetheless became an ardent Hellene, mastering Greek cooking and traditions. Yet nothing held a larger place in Madeline’s life than her family and friends. She was a huge proponent of the “big tent” approach to life—the more people, the better. She loved to entertain, keeping her heart and home open to anyone who wanted to be in it. A perfect day meant spending time at the beach with her grandchildren or sitting around a table with friends sharing laughter. Never without the perfect pin, shoe or handbag – nearly always with a bit of print and sparkle – she appreciated dressing for the occasion. Madeline enjoyed 53 years “of magic” with her husband, Ted—who never stopped making her smile and blush with his piercing blue eyes. Her loss leaves a hole in the hearts of so many. She was predeceased by her sister Mary Antonina Broaca. Madeline is survived by her husband, Theodore Varitimos, and their two children, Antonina Edwards and her husband, Charles of Charlotte, NC, and Eleni Varitimos and her husband, Kevin Higginbottom of Methuen; as well as her cherished sister, Elizabeth Heffernan of Andover. She also leaves behind four grandchildren: Stephanie Margaret Edwards, Theodore Richard Higginbottom, Madeline Pamela Edwards, and Henry James Tiberius Higginbottom, as well as her three begrudgingly loved step-cats. Also left to mourn are her brother-in-law, Nick Varitimos, a niece and nephew, several great-nieces, great-nephews, and many cousins. Family and friends are invited to honor and celebrate Madeline’s life by gathering for calling hours at Kenneth H. Pollard Funeral Home, 233 Lawrence Street in Methuen on Tuesday, August 31, 2021, between 4:00 and 8:00 p.m. A funeral service will be held on Wednesday, September 1, 2021, at 10:00 AM at Saints Constantine and Helen Greek Orthodox Church, 71 Chandler Road, Andover. Burial services will follow at Bellevue Cemetery in Lawrence. Masks are required at both calling hours and the church service. In lieu of flowers, donations can be made to the Methuen Historical Society, PO Box 52, Methuen, MA, 01844, or the American Heart Association, 2 Wall Street Manchester, NH, 03101. Please indicate “In Memory of Madeline Varitimos.” For directions and online guestbook, please visit the funeral home website, www.pollardfuneralhome.com. The Kenneth H. Pollard Funeral Home is honored to serve the Varitimos Family.

Madeline (Broaca) Varitimos, 82, of Methuen, passed away peacefully after a short period of declining health at High Pointe Hospice House on Tuesday, August 24, 2021. Madeline was born in Lawrence, MA, daughter of the late Victor and Stephanie... View Obituary & Service Information

The family of Madeline Varitimos created this Life Tributes page to make it easy to share your memories.