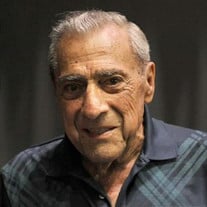 Louis J. Panebianco, 95, of Lakeland, FL, longtime resident of Salem, NH, passed away at home on May 14, 2019. Born on August 16, 1923 to the late Morris and Margaret (Zambino) Panebianco in Lawrence, MA, he attended Lawrence High School. After high school, Louis served honorably in the US Army during WWII. A highly decorated soldier receiving most notably the Purple Heart and the Chevalier of the Legion, in which he was awarded by French Presidential Proclamation in 2012, he fought gallantly in Northern Africa, Italy and the Rhineland campaigns. After his discharge from the military, Louis worked for Raytheon as an engineer until his retirement. A lifelong devout Catholic, he was a member of the Knights of Columbus, the Elks Lodge, the Disabled American Veterans and loved golfing. A man who was known for being very assertive, loyal, and extremely independent, Louis was a self-made man who was the beloved patriarch of his family. Believing in the value of completing his education, Louis completed all of his requirements and received his high school diploma at the age of 93. He loved spending quality time with his family, from enjoying a simple meal to hosting Manhattan Night’s every Friday evening. Louis was a selfless man who had many routines and always brought a smile to everyone’s face. He will fondly be loved, cherished and missed by all. Louis is survived by his cherished sister, Madeline Ouellet and her husband Robert, of Plaistow, NH. He is also survived by his children; Joan Fiato of Billerica, Rosemary Doyle and her husband Jeff of Malden, Larry Albain and his wife Chris of Florida, and Peter Galluzzo and his wife Sandra of Arlington. He was the proud grandfather to his eight grandchildren and eleven great-grandchildren. Louis is also survived by many nieces and nephews. In addition to his parents, he was preceded in death by his bride Mary C. (Vigliarolo) Panebianco in 2015, his daughter Janice Whittier, his brother Morris Panebianco and his wife Louise and his sister Mary Barnes. Visitation for Louis will be held on Tuesday, May 21, 2019 from 4 – 8 PM at the Kenneth H. Pollard Funeral Home, 233 Lawrence Street, Methuen. Friends and family are cordially invited to attend. A Mass of Christian Burial will be celebrated on Wednesday, May 22, 2019 at 11 AM at Saint Monica’s Church, 212 Lawrence Street, Methuen. Military funeral honors will be held at the conclusion of the funeral mass. To honor Louis’ wishes, interment will be privately held. In lieu of flowers, please consider making a donation Louis’ memory to the Good Shepard Hospice, 105 Arneson Street, Auburndale, FL, 33823. To leave an online condolence, please visit www.pollardfuneralhome.com. The Kenneth H. Pollard Funeral Home is proud to serve the Panebianco family.

Louis J. Panebianco, 95, of Lakeland, FL, longtime resident of Salem, NH, passed away at home on May 14, 2019. Born on August 16, 1923 to the late Morris and Margaret (Zambino) Panebianco in Lawrence, MA, he attended Lawrence High School.... View Obituary & Service Information

The family of Louis J. Panebianco created this Life Tributes page to make it easy to share your memories.