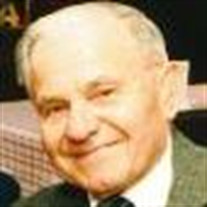 Leo Joncas, age 99, a lifelong resident of Lawrence, MA, died December 27, 2017, just four days before his 100th birthday. His loving family was by his side at the Mary Immaculate Nursing Center in Lawrence. Mr. Joncas was known for his tireless work ethic and his welcoming smile. He left high school in the 9th grade to work in the Wood Mill in Lawrence to support his family. He worked for many years at Avco Corporation, a manufacturing company in Wilmington, MA, and was later a longtime custodian, bus driver and finally head groundskeeper for Greater Lawrence Technical School in Andover, MA, as well as a driver for General Auto Supply Co. in Lawrence. Throughout most of his adult life Mr. Joncas worked two jobs at a time. In the early 1940s Mr. Joncas worked as the camera operator at the former Star Theatre, 479 Broadway, Lawrence. It was there he met his wife, Louise Hayes, whom he married on February 5, 1943. Leo and Louise had two children, daughter Carol and son Leonard, and were married for 59 years until Louise died in 2002. Mr. Joncas continued to work until he retired at the age of 88, when he had to give up his driver’s license due to health reasons. His first act upon losing the ability to drive was to purchase a bicycle because he needed, in his words, “wheels to get around”. Mr. Joncas was a lifelong active Catholic and attended both the former Assumption B.V.M. Parish on Lawrence Street, Lawrence, and St. Monica Parish, Lawrence St., Methuen. He volunteered for more than 20 years at Mary Immaculate Nursing Center. He will be fondly remembered by his many friends and family for his humor, laugh and willingness to help anyone in need. Mr. Joncas is survived by his daughter, Carol (Joncas) Emmert, of Methuen, and her companion Anthony D’Amico of Salem,NH; and son Leonard Joncas, of Georgetown, MA, and his wife, Frances. He is also survived by grandchildren Dawn Emmert, of Lawrence, and her fiancé, Stephen Donovan; James Emmert, of Pelham, NH, and his wife Holly; Judy Emmert, of Bedford, NH, and her husband, Kevin O’Brien; William “Joe” Trabucco, of Dracut, MA, and his wife Linda, and Janay Trabucco, of Groton, MA. He is also survived by great-grandchildren Jessica and Emily O’Brien, of Bedford, NH, and Kaela, Samantha, Hannah and Madison Trabucco of Dracut, MA. He was preceded in death by his son-in-law, James Emmert, of Methuen, MA. The Joncas family would also like to express their sincere appreciation and gratitude to the staff at Mary Immaculate Nursing Center for their excellent and compassionate care of “Grampa” Leo. A Mass of Christian Burial will be celebrated for Mr. Joncas will be held at St. Monica’s Parish, 212 Lawrence St., Methuen, on Wednesday, Jan. 3, at 9 a.m. Calling hours will held Tuesday, Jan. 2, from 4-8 p.m. at Kenneth H. Pollard Funeral Home, 233 Lawrence St., Methuen, MA. To leave an online condolence please visit www.pollardfuneralhome.com. The Kenneth H. Pollard Funeral Home is proud to serve the Joncas Family.

Leo Joncas, age 99, a lifelong resident of Lawrence, MA, died December 27, 2017, just four days before his 100th birthday. His loving family was by his side at the Mary Immaculate Nursing Center in Lawrence. Mr. Joncas was known for his tireless... View Obituary & Service Information

The family of Leo Joncas created this Life Tributes page to make it easy to share your memories.