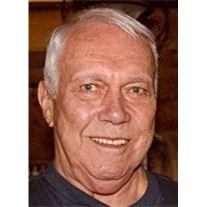 LAWRENCE ? Leo J. Deschamps, 81, of Lawrence, died peacefully on Friday, Nov. 27, 2009 at his home, surrounded by his loving daughters and son-in-law. Born and educated in Lawrence, he was the son of the late Auguste Deschamps, who was born in Woonsocket, R.I., and Amanda (Levesque) Deschamps of Methuen. He was a graduate of Lawrence High School and received his bachelor's degree in Business Administration from Merrimack College. For 35 years, he was employed at Western Electric in North Andover as an accountant and retired from Lucent Technologies in 1991. He was a parishioner at Sacred Heart Parish in Lawrence, prior to its closing, and also a member of the Lawrence Elks BPOE 652. Leo served in the U.S. Army Infantry during the Korean War and was honorably discharged. He also enjoyed taking rides to the beach and swimming in the ocean. He was most passionate about spending time with his family, especially during the 26 years of marriage to his beloved wife, the late Patricia J. (Mills) Deschamps, his daughters, and their families. He survived by his daughters, Donna Frazier Barnes and her husband Edwin of Methuen, Rachel O'Brien of Haverhill, Gail Fox of Salem, N.H., and Laura Gravener and her husband Christian of Sandown, N.H.; two brothers, Joseph Raymond Deschamps and his wife Hazel of Hampton, N.H. and Jules Deschamps and his wife Christiane of Cape Elizabeth, Maine; one step-brother, Ronald Ford of Phoenix; nine grandchildren, Robert J. Frazier, Ryan J. Frazier, Valerie P. Landon, Michael C. O'Brien, Amanda P. O'Brien, Christopher J. Fox, Melissa P. Fox, Christian M. Gravener and Samantha P. Gravener; two great-granchildren, Kianna I. Landon and Ava J. Landon; one aunt, several nieces, nephews, cousins and friends. ARRANGEMENTS: Memorials can be made to Merrimack Valley Hospice, 360 Merrimack St., Bldg 9, Lawrence, MA 01843; or to the Lazarus House, P.O. Box 48, Lawrence, MA 01842. Family and friends may call on Monday, Nov. 30, 2009 from 4 to 8 p.m. at the Kenneth H. Pollard Funeral Home, Inc., 233 Lawrence St., Methuen. Funeral Mass will be celebrated on Tuesday, Dec. 1, 2009, at 9 a.m., at St. Monica's Church, Methuen. Burial will follow in Sacred Heart Cemetery, Andover. For directions or condolences, please visit pollardfuneralhome.com.

LAWRENCE ? Leo J. Deschamps, 81, of Lawrence, died peacefully on Friday, Nov. 27, 2009 at his home, surrounded by his loving daughters and son-in-law. Born and educated in Lawrence, he was the son of the late Auguste Deschamps, who was born... View Obituary & Service Information

The family of Leo J. Deschamps created this Life Tributes page to make it easy to share your memories.