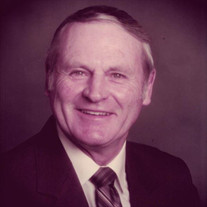 Lawrence “Larry” R. Peglow, age 96 of Methuen passed away peacefully in his sleep on May 28, 2020 after a period of declining health at the Sutton Hill Center in North Andover. Larry was born in Brooklyn, NY on February 1, 1924 to the late Rudolph and Emma (Doerr) Peglow. He was raised in Methuen and attended Methuen Schools. Larry was a graduate of Essex County Agricultural School, Class of 1944. Larry owned and operated Peglow Oil Service of Methuen for 20 years. He loved animals and worked on many farms in his youth. He then worked for Oxford Paper Mills in Lawrence and retired from Bay State Gas Co. of Lawrence. Larry was in the United States Naval Reserves for two years. Larry’s hobby was his vegetable garden, it was the biggest and best in the neighborhood. He also had many motor boats and enjoyed fishing and boating in the lakes of New Hampshire with his family. Larry was the beloved husband Grace (Dunbar) Peglow with whom he shared 74 years of marriage. He was the devoted father of Ronald Peglow, Randall Peglow and his wife Linda, Susan D’Amico and her husband Sal, and Richard Peglow and his wife Debbie. He was the loving grandfather of Mark, Jay, Jamie, Joel, Brandee, and Laurie. Larry was the cherished great-grandfather of Jeremy, Maddox, Delaney, Fiona, Cora, and Rosalie. He was the dear brother of Ruth Hebsch, brother in-law of Ruth Peglow, and the brother in-law of Robert Hebert. He is also survived by many nieces and nephews. Larry is predeceased by his brother Donald W. Peglow, brother in-law Donald Hebsch, brother in-law Paul Dyer, sister in-law Virginia Dyer, and sister in-law Dorothy Hebert. The family would like to thank the Sutton Hill Center and Hospice team for all the care and compassion shown to Larry during his stay there. All services are private. In lieu of flowers, memorial contributions in Larry’s name may be made to the MSPCA-Nevins Farm, 400 Broadway Methuen, MA 01844. For online guestbook, please visit the funeral home website, www.pollardfuneralhome.com. The Kenneth H. Pollard Funeral Home is honored to serve the Peglow Family.

Lawrence &#8220;Larry&#8221; R. Peglow, age 96 of Methuen passed away peacefully in his sleep on May 28, 2020 after a period of declining health at the Sutton Hill Center in North Andover. Larry was born in Brooklyn, NY on February 1, 1924 to... View Obituary & Service Information

The family of Lawrence R. Peglow created this Life Tributes page to make it easy to share your memories.