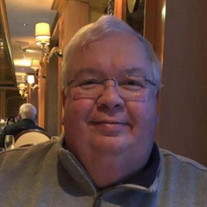 Late in the afternoon of November 15, 2021, a kind and gentle heart ceased beating. Larry had spent the day with his beloved wife, Bonnie, at Massachusetts General Hospital where Larry was a patient. Bonnie said that, at his passing, Larry extended his arms as if he was greeting loved ones, and that his facial expression was serene and joyful. Laurence J. True was born on April 07, 1953 to Malcolm and Virginia (Davies) True. The third of three children, Larry grew up in the Tower Hill area of Lawrence, Massachusetts. He graduated from the Greater Lawrence Regional Vocational and Technical High School, completing his studies at the world-renowned Culinary Institute of America. After his graduation from the Institute, Larry embarked on a long career in the food service industry. For a time, he was the proprietor of the Three Lights Café in Haverhill, Massachusetts. After working in various food service sectors, Larry began a successful career in the wholesale food industry. He retired in June of 2021. Throughout his career, Larry was a member of a number of professional food service organizations. Principal among these was the Massachusetts Chefs de Cuisine. A measure of the admiration that his colleagues in this organization had for Larry is represented in his being recognized as the Peter Berrini Chef of the Year in 1995, the citation reading, “For outstanding achievement, distinguished service and diligent effort toward the advancement of the Massachusetts Chefs de Cuisine of Boston and vicinity and to the culinary profession”. As a child, Larry was known as “Lonnie”. However, the nickname given to him by his nieces and nephews of “Unc’ was the name that most of the family used. Throughout the years, Unc catered numerous get togethers for various sporting events. Assisted by his wife, Bonnie, Unc went out of his way to put together delicious food offerings for family and friends. He delighted in trying to out due himself on each occasion. At Christmas parties for family and friends hosted by his sister, he received standing ovations for his efforts in food preparation. Larry is survived by his wife and best friend, Bonnie (Fogg) True, step-daughter Erika Cox, granddaughter Kourtney Cox and grandsons Buster Gosnell III and Carl Rasmussen. He is survived by his sister, Nancy (True) Wlodyka and her husband, Dennis Wlodyka. He is survived by his brother, Richard, and his wife, Donna (Milius) True. He is also survived by nieces Amy (Wlodyka) Allaire and Jennifer True, nephews Jonathan and Nicholas Wlodyka and Christopher True. In addition to his immediate family, Larry was beloved to his extended family and to his many friends who have offered kind condolences. Family and friends are invited to a wake for Larry to be held on Monday, November 22, 2021 from noon until 2:00PM at the Kenneth H. Pollard Funeral Home, 233 Lawrence Street, Methuen, MA 01844. A memorial service will be held directly thereafter. Burial and committal services will be held on November 23, 2021 at 11:00AM at the family plot at the St. Mary-Immaculate Conception Cemetery, Lawrence MA. For directions and online guestbook, please visit the funeral home website, www.pollardfuneralhome.com. The Kenneth H. Pollard Funeral Home is honored to serve the True Family.

Late in the afternoon of November 15, 2021, a kind and gentle heart ceased beating. Larry had spent the day with his beloved wife, Bonnie, at Massachusetts General Hospital where Larry was a patient. Bonnie said that, at his passing, Larry extended... View Obituary & Service Information

The family of Laurence "Lonnie" J. True created this Life Tributes page to make it easy to share your memories.