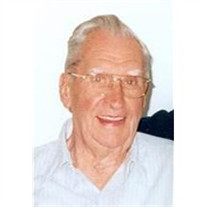 Methuen, MA ? Laurence F. Markey, 90 died Friday, December 16, 2011 at the Methuen Health and Rehabilitation Center surrounded by his loving family. Born in Lawrence, MA. on July 15, 1921, he was the son of the late Thomas and Mary (Moran) Markey. Mr. Markey served in the Civilian Conservation Corps. prior to World War II. He served in the U.S. Army during World War II, having fought at the Battle of the Bulge. For 35 years, Laurence worked as an industrial caterer and was the owner and operator of Markey?s Rolling Kitchen in the Greater Lawrence area. He also worked as a security guard for the Holy Family Hospital for over 20 years. He was a former member of the Knights of Columbus Council 4027 in Methuen. Survivors include his wife of 65 years, Mary K. (Kenyon) Markey, his son and daughter-in-law, James M. and his wife Christine Markey of Methuen, his daughter and son-in-law Carol A. and her husband James J. Keating of Methuen, his son Daniel F. Markey of Derry, NH, a brother Dr. John Markey and his wife Eileen of Villages, FL, eleven grandchildren, and thirteen great grandchildren. He is the father of the late William L. Markey and is predeceased by three brothers, Thomas F. Jr., Bernard F., and Joseph P. Markey. A Mass of Christian Burial will take place on Wednesday morning at 9 o?clock in Saint Monica?s Church in Methuen with burial to follow in Ridgewood Cemetery in N. Andover. Friends will be warmly received on Tuesday from 4-8 p.m. at the Kenneth H. Pollard Funeral Home 233 Lawrence Street in Methuen. Memorial contributions may be made to American Lung Association, 460 Totten Pond Road, Suite 400, Waltham, MA 02451-1991 or to the American Heart Association, New England Affiliate, Inc., 20 Speen Street, Framingham, MA 01710.

Methuen, MA ? Laurence F. Markey, 90 died Friday, December 16, 2011 at the Methuen Health and Rehabilitation Center surrounded by his loving family. Born in Lawrence, MA. on July 15, 1921, he was the son of the late Thomas and Mary (Moran)... View Obituary & Service Information

The family of Laurence F. Markey created this Life Tributes page to make it easy to share your memories.