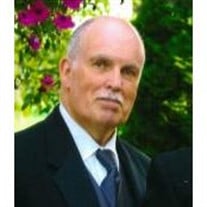 Kevin Moriarty, 74 of Methuen, MA passed away on Tuesday, January 7, 2014, at the Mass General Hospital after a year-long battle with Leukemia. Cherished husband of Reggie (Quartarone) for 51 years; loving father of Kevin Jr., Brian, and daughter Cheryl Amabile; loving brother of Arthur, Sean, and sister Jane Cusack; loving grandfather of Ashleigh, Joshua, Andrea, Isaac, Brooke, Allison, Hannah and James, loving uncle, and friend to all. Kevin was a lifelong resident of Methuen and graduated from Central Catholic in 1959. He was the store manager and a much-sought-after clothing salesman at Kaps Men's Clothing store for forty-five years. After retiring he took on a higher calling. He was a devoted volunteer on the board of directors with Somebody Cares New England, serving the low-income, distressed population, and he was an elder and licensed minister at Community Christian Fellowship in Haverhill, MA. Kevin was a proud U.S. Navy veteran whose service on the USS Canberra gave him a great source of material for his lifetime love of telling stories. A great friend to all that knew him, a giant of a man to those of us that knew him best. His dedication to God, his family, and to those in need was truly something to behold. The high road he walked on earth has surely taken him to the promised land. Kevin was not one to preach his faith or to act "holier than thou". He let his life serve as his sermon and the message his life preached will live on in those of us that loved him, of which there are many. In lieu of flowers, donations can be sent to Somebody Cares New England, 358 Washington Street, Haverhill, MA 01830. A Funeral Service will take place on Saturday at 12:30 PM in the Riverside Assembly of God 15 Lowell BLVD Methuen, Ma. Friends will be warmly received on Friday from 3-7 PM at the Kenneth H. Pollard Funeral Home 233 Lawrence Street in Methuen. The Kenneth H. Pollard Funeral Home is honored to serve the Moriarty and Quartarone families.

Kevin Moriarty, 74 of Methuen, MA passed away on Tuesday, January 7, 2014, at the Mass General Hospital after a year-long battle with Leukemia. Cherished husband of Reggie (Quartarone) for 51 years; loving father of Kevin Jr., Brian, and daughter... View Obituary & Service Information

The family of Kevin Moriarty created this Life Tributes page to make it easy to share your memories.

Kevin Moriarty, 74 of Methuen, MA passed away on Tuesday, January...