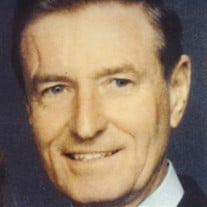 Kenneth A. Wilman, died on November 28, 2018 at the Prescott House in North Andover at the age of 90. He was born in Lawrence, MA on July 11, 1928 to Albert and Margaret Wilman. Ken was the husband of Virginia (Bourque) Wilman for 65 years. Ken was a graduate of Edward F. Searles High School in Methuen in 1947. He received his degree in Civil Engineering from Northeastern University and a Master’s degree in Urban Affairs from Boston University. Ken was a member of the United States Army during the Korean War. Ken was employed with the Massachusetts Department of Public Works as a resident engineer on several bridges on Interstate 495. He also served as the State Planning and Liaison Officer before becoming the Deputy Director of Planning and retiring as the District 5 Construction Engineer. Ken served the Town of Methuen as a town meeting member and as an elected member of the Planning Board, the Zoning Board of Appeals, and the Conservation Committee. Ken was also a member of the Methuen Knights of Columbus, holding the office of Treasurer of Gaythorne, Inc. In addition to his wife, Virginia, also surviving him are his daughters, Donna Duerr and her husband, John and Jane Cole and her husband, Roy, and his son, Kenneth Wilman, Jr. and his wife, Linda. Ken was predeceased by his daughter, Susan Wilman. Also surviving are his grandchildren, Arianne Sangermano and her husband, Nicholas, Jessica Olivieri and her husband, Richard, John Duerr, and Andrea Feliciano. Great grandchildren, Isabella, Nicholas, Zachary, Benjamin, Sangermano and Lacy and Cole Olivieri. Visitation for relatives and friends will be held from 10:00 AM until 11:00 AM on Monday, December 3, 2018 at St. Michael’s Church, 196 Main Street in North Andover. His Funeral Mass will take place at 11:00 AM at the church immediately following calling hours. Guests are kindly asked to meet directly at the church. Burial will be private and at the convenience of the family. In lieu of flowers, donations in Ken’s memory may be made to Bread & Roses Soup Kitchen, 58 Newbury Street, Lawrence, MA 01840. To send a condolence to Ken’s family, please visit www.pollardfuneralhome.com. The Kenneth H. Pollard Funeral Home, 233 Lawrence Street, Methuen, is honored to serve the Wilman family.

Kenneth A. Wilman, died on November 28, 2018 at the Prescott House in North Andover at the age of 90. He was born in Lawrence, MA on July 11, 1928 to Albert and Margaret Wilman. Ken was the husband of Virginia (Bourque) Wilman for 65 years.... View Obituary & Service Information

The family of Kenneth A. Wilman created this Life Tributes page to make it easy to share your memories.