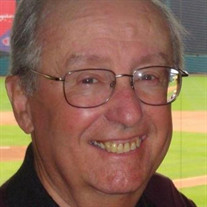 Kenneth Joseph “Kenny” Cyr of Methuen, Massachusetts passed away on November 3, 2021, at the age of 84. Kenny was born on August 29, 1937 in Lawrence, MA to the late Adelard and Fabiola (Dube) Cyr. Born and educated in Lawrence, he graduated from Central Catholic High School, class of 1955, and from Merrimack College, Cum Laude, in 1960. He then served two years of active duty in the Navy on the USS Blandy. Upon returning, he worked at the IRS and graduated from Suffolk Law School (JD). After thirty years at the IRS, he retired. Kenny was well known in the Merrimack Valley for his love of baseball, which was passed down to his children and grandchildren. After years of coaching and mentoring youth as a basketball and baseball coach, he took to supporting others. Ask almost anyone involved with Methuen baseball, and they'll know Kenny Cyr, or will have heard from him or at least of him. He loved baseball, he loved Methuen baseball and he particularly loved baseball played in, or coached by, members of his family. He was once referred to as the "Father of Methuen Baseball" - but really he was our youth's biggest cheerleader! Generations of Methuen youth and, in later years, Greater Lawrence Tech youth, had consistent and loud support from a man who once said "Baseball players deserve cheering too". Umpires and players alike grew to appreciate his unique - and creative - colloquialisms. Kenny’s dedication to baseball was only superseded by his love for his children, grandchildren, and great-grandchildren - and most of all his beloved wife, Constance (Connie). In addition to his parents, he was predeceased by the love of his life, Constance "Connie" (Doucette) Cyr, fifteen years prior and whom he remained deeply in love with, carrying their wedding rings around his neck until the day of his passing. Ken wanted to recognize his lifelong friend, Dick Cain, who continued to be a part of each other's lives since they were 10 years old. The “battery”, Ken pitching, Dick catching; a lifelong friendship. He is survived by his three sons, Christopher Cyr and his son, Evan with his wife, Christine and daughters, Mirai and Ceana; Gregory Cyr and his wife, Laurie, and their children, Shayna and her husband, Ryan Bibeau, Cody and his wife, Christina and Cameron and his partner, Victoria Daigle; Eric Cyr and his partner, Julia Rutherford and her daughter, Samantha; brother, Ronald Cyr; and his sister, Patricia Bastek. He also leaves behind two great-grandchildren, Rowan, who recognized his laughter with the nickname HaHa and Everly Constance. Relatives and friends are respectfully invited to attend visiting hours from 2:00-6:00 PM on Sunday, November 7, 2021 at the Pollard Funeral Home, 233 Lawrence Street in Methuen. A Mass of Christian burial will be held on Monday, November 8, 2021 at 11:00 AM at St. Monica Church, 212 Lawrence Street in Methuen, where Ken had been a Eucharistic Minister. Burial will follow at Elmwood Cemetery in Methuen. In lieu of flowers, Ken would love to see donations in his name to our high school programs that he so generously supported at either Greater Lawrence Technical School Athletics, 57 River Rd., Andover, MA or Methuen Boosters at PO Box 2229, Methuen, MA 01844. For directions and online guestbook, please visit the funeral home website, www.pollardfuneralhome.com. The Kenneth H. Pollard Funeral Home is honored to serve the Cyr Family.

The family of Kenneth "Kenny" J. Cyr created this Life Tributes page to make it easy to share your memories.