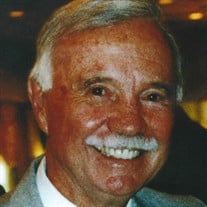 METHUEN – Kenneth Russell Hyde, DMD (Doc), 94, lifetime Methuenite, passed peacefully on Saturday, December 16. He was predeceased by his treasured wife, Jacqueline T. (Mooney) Hyde. Doc was a well-known dentist and golfer. Born in Methuen on February 22, 1923, to the late William Russell Hyde and Mary (Kenney) Hyde, Ken grew up on Ashland Avenue. Attending Methuen Public Schools, he graduated from Searles High School where he played football, basketball, and baseball. After attending Tilton Academy in 1941, he went on to Tufts University, earning his D.M.D. in 1946. During WWII, “Doc” proudly served his country in the U.S. Navy where he was stationed in China. In 1958, Doc joined the Methuen Co-operative Bank’s Board of Directors where he acted as both member and Chairman, Ken and late wife Jackie enjoyed many years playing golf at Merrimack Valley Country Club where they amassed a wide circle of friends. They continued their passion for golf throughout the years playing at Andover Country Club, Vesper, and the Breakers in West Palm Beach. “Doc,” at age 89, had the distinguished honor of being the oldest playing member at Andover Country Club. Ken practiced dentistry in Methuen for forty-nine years. Generations of patients were seen in his Methuen Square office. Patients often remarked about Doc’s easygoing manner and were impressed by the fact they were always seen on time and never had to wait. “Doc” retired at the age of 79 and continued his active lifestyle playing golf and vacationing in Florida. Despite his busy practice, Ken always made time for his family. He attended the many athletic events of his children Coleen, Ken, and Mimi. Each February the family vacationed at Daytona Beach, and prior to Jackie’s illness, Ken and she spent time at their home on Singer Island. He enjoyed special time with his family in California, Las Vegas, New Hampshire, and Florida. In Ken is survived by his three children, Coleen Brennan and husband Dave of Newport Beach, California; Kenneth Russell Hyde, Jr., and his wife Debbie of Andover; and Mimi Hyde and her fiancé Chet Dwulet of Methuen; his grandchildren, Kaitlin (Hyde) Gorman and her husband Jake of Boston; Brent and Allison Hyde of Andover; Russell Hyde Stott and his wife Kristen of North Andover; and his sister Frances (Hyde) Stephan of West Newbury. Predeceasing him were his niece Holly Zecker and his sister Alice (Hyde) Walker in 2015. Additional survivors include his nephews Geoff Walker, and Dan Zecker, along with great nephews, a great niece, good friend Mary Shaheen, and extended family including his many close friends. The family wishes to thank the care givers of the Methuen Village for their kindness and attentiveness to “Doc.” A special appreciation is extended to his favorites, Alicia and Olga, as well as Dr. Tracy Ramos. Finally, heartfelt thanks are offered to the Compassionate Care Hospice staff for their consideration, empathy, and professional wisdom. ARRANGEMENTS: Friends and family may call Saturday, December 23, from 9-11 AM with the ceremony directly following at 11 AM at the Kenneth H. Pollard Funeral Home, 233 Lawrence Street in Methuen. In lieu of flowers, donations can be made in his memory to “Dr. Ken Hyde Memorial Fund,” at the funeral home or by mailing to the Methuen Co-Operative Bank, 243 Broadway, Methuen, MA 01844. All contributions will aid Methuen High School Athletics.

The family of Dr. Kenneth Russell Hyde DMD created this Life Tributes page to make it easy to share your memories.