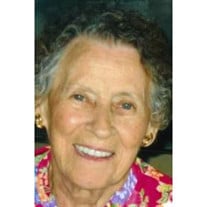 Julia J. (Marino) Steffen, 87, of Atkinson, NH, former longtime resident of Lawrence, passed away on September 7, 2017 surrounded by her devoted family at the Merrimac Valley Hospice House in Haverhill, MA. Julia was born on December 28, 1929 to her hardworking parents, Giuseppe and Julia (McGough) Marino in Malden, MA. A devout lifelong Catholic, she attended school at Sacred Heart in Malden. A woman who was devoted to caring for her large family, Julia was actively involved in all aspects of her children?s lives. Julia loved spending her summers at Sebago Lake and Long Lake in Maine. She played an important role at the Assumption Church in Lawrence when her children were younger. Julia was a kind hearted woman who was very selfless and would go without to ensure her family had everything they needed. Social activities played a very large part of her life, she was the past president on several different occasions of the Lady Elks in Lawrence, and additionally her smiling face graced the halls of the Vic Geary Senior Center in Plaistow or the Silverthorne Senior Center in Salem. Julia was very well travelled and even visited Ireland to trace her family roots. She enjoyed many different things during her life; watching the Patriots, the occasional trip to Foxwoods, and dancing, especially to Irish music. Julia lived in the moment and always saw the silver lining. She touched many lives in many dif-ferent circles and will be fondly remembered, cherished and missed. Julia is survived by her twelve loving children; her daughter, Mary L. and her husband Robert Wilson of Hillsborough, NH, her son, Richard C. and his wife Judy Steffen of Davenport, FL, her daughter, Linda A. Steffen of Methuen, MA, her daughter, Donna Belmonte of Hampstead, NH, her son, Charles D. and his wife Elaine Steffen of NC, her son, Edward D. and his wife Marsha Steffen of Henniker, NH, her daughter, Maria L. Gilbert of Plaistow, NH, her daughter, Paula A. and her husband Scott Britton of Sandown, NH, her daughter, Elizabeth Steffen of Hampton, NH, her daughter, Rita A. and her husband John Sherman of Londonderry, NH, her daughter, Cheryl A. and her husband Patrick Beirne of Haverhill, MA, and her daughter, Christi-na M. and her husband David Bajgrowicz of Atkinson, NH. She was also the proud and cher-ished grandmother and great-grandmother to her many grandchildren and great-grandchildren. Julia was also the beloved aunt to several loving nieces and nephews. In addition to her parents, Julia was preceded in death by her son, David E Steffen, and her daughter, Julia A. Steffen. She was also predeceased by her two brothers, Harry Marino and Joseph Marino, and her sister, Lucy Gibson. Visitation for Julia will be held on Tuesday, September 12, 2017 from 4 ? 8 PM at the Kenneth H. Pollard Funeral Home, 233 Lawrence Street, Methuen, MA. Friends and family are cordially invited to attend. A Mass of Christian Burial will be celebrated Wednesday, September 13, 2017 9 AM at St Monica's Church, 214 Lawrence Street, Methuen. Interment to follow at Holy Cross Cemetery, 175 Broadway, Malden, MA. In lieu of flowers, please make a contribution in Julia?s memory to either the Alzheimer's Association Massachusetts/New Hampshire, 309 Waverley Oaks Road, Waltham, MA 02452 or to the Vic Geary Senior Center, 18 Greenough Rd, Plais-tow, NH 03865. Online condolences can be given at http://www.pollardfuneralhome.com. The Kenneth H. Pollard Funeral Home is proud to serve the Steffen family.

The family of Julia J. (Marino) Steffen created this Life Tributes page to make it easy to share your memories.