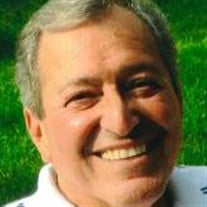 Dr. Joseph S. Maroun Sr., 78, passed away unexpectedly on Tuesday April 24, surrounded by his wife & loving family. He was born in Lawrence, MA to parents Said & Louise (Antoon). Joseph attended Central Catholic High School while working at his family business, Maroun Brothers Wholesale. He is a graduate of Central Catholic. He then furthered his education at Boston College. After Graduation he went on to Tufts Dental School. He practiced Dentistry in the Navy for two years before opening his own practice of 50 years in Salem NH. Joseph loved all Boston sports teams, spending winters in Florida, summers at the beach, staying fit, reading and all kinds of music. He was adored by all his patients. He was known for his wit and humor and his unfiltered personality. Joseph leaves behind His wife of 55 years, Joyce, sister Carol Ann Maroun, sons Joseph S. Jr, Christopher and his wife Jodie, Matthew and daughter Mellissa and her husband Paul. He also leaves behind brother’s in laws’, Kenneth Yameen, Thomas Yameen & his longtime companion Kathy Timmons & sister in law Elanie Yameen. Along with many cousins, nieces and nephews. In his later years he enjoyed being the proud grandfather (Jiddo) to Ava, Alexis, Paul, Caiden & Corey. Doctor Maroun was a loving Husband, Father and friend who always put his wife’s and his family’s happiness ahead of his own. He will be missed. Arrangements: There will be no calling hours, but relatives and friends are kindly invited to attend a funeral Mass on Thursday April 26, at 11:00 a.m., at St. Anthony Maronite Church, 145 Amesbury Street, Lawrence. Burial Services will be private. In Lieu of flowers, memorial contributions in Joseph’s honor may made to St. Anthony Maronite Church, 145 Amesbury Street, Lawrence, MA 01841.

The family of Dr. Joseph S. Maroun Sr. created this Life Tributes page to make it easy to share your memories.