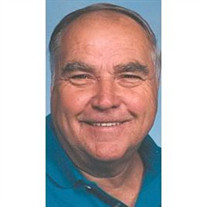 Joseph C. Bourque, 77, a longtime resident of Boxford, and U.S. Navy veteran in Korea died Wednesday at Mass General Hospital after an accident at home. He was born in Haverhill, July 31, 1934 the son of the late Joseph C. and Eva (Pare) Bourque. Joe worked for many years as a field service insurance agent and later retired from the Haverhill Court House. Joe was most known for his large family, his love of sports and the nickname "Bozo", lovingly given to him by his grandchildren. He was known to attend most every sporting event that his eight children and 19 grandchildren were involved in. Joe also enjoyed traveling with his wife, Lou and best friends, Jim and Sandy. According to Joe, he never had a good day, but family and friends know better, he lived a happy life and will be dearly missed by all who knew and loved him. His survivors include his wife of 52 years, Lucille G (Scanlon) Bourque, their eight children, Paul Bourque and his wife Mary of Haverhill, Nancy King and her husband Robert of Boxford, Joyce Lombardi and her significant other Alan Blomberg, James Bourque and his wife Sherry of Atkinson, David Bourque and his wife Susan of Bradford, Kevin Bourque and his wife Jodi of Smithfield, RI., Cheryl Northam and her husband Gene of Atkinson, NH and Charlene Lizotte of Hampstead, NH along with his 19 grandchildren: Nathan, Nikki and Jeremy King, Sarah and AJ Lombardi, John and Jacquelynne Bourque, Michael and Elizabeth Bourque, Shannon, Shawn and Shayla Miller, Sierra Bourque, Kyle and Ryan Bourque, Jordan, Zachary, Lucas and Hailey Lizotte; sister Virginia Wilman and her husband Kenneth, lifelong friend James Thomas and his wife Sandra as well as many other close family members. In lieu of flowers contributions may be made to the Joseph "Bozo" Bourque Scholarship Fund c/o TD Bank or to Bread and Roses, 58 Newbury St. Lawrence, Ma 01843. A Mass of Christian burial will take place on Monday morning at 10 o?clock in Saint Michael?s Church in North Andover with burial to follow in Saint Josephs Cemetery in Haverhill.Friends will be warmly received on Sunday from 4-8 p.m. at the Kenneth H. Pollard Funeral Home, Inc. 233 Lawrence Street in Methuen.

Joseph C. Bourque, 77, a longtime resident of Boxford, and U.S. Navy veteran in Korea died Wednesday at Mass General Hospital after an accident at home. He was born in Haverhill, July 31, 1934 the son of the late Joseph C. and Eva (Pare) Bourque. Joe... View Obituary & Service Information

The family of Joseph C. Bourque, Jr. created this Life Tributes page to make it easy to share your memories.