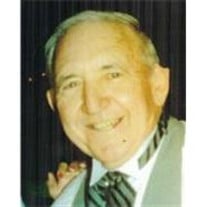 LAWRENCE ? John J. Toohig, 87, died unexpectedly on October 26, 2013 at his home. Born in Lawrence, MA, the second of eight children if Irish immigrant parents, the late Timothy and Catherine (Walsh) Toohig. He received his education in the Lawrence School System and graduated from Lawrence High School with honors in 1943. After proudly serving his country in the U.S. Navy, he became a foreman for the New England Telephone Company, where he worked until his retirement. A scholar and star athlete, he was also an avid sports fan, following all the Boston sports teams and was counting on another World Series win for his beloved Red Sox. For many years he was also involved in youth sports, including Lowell Youth Hockey and Shedd Park Baseball. John resided in Belvidere for many years and was a communicant of the Immaculate Conception Church and later St. Patrick?s Church in Lawrence. He was a lifetime member of the Lawrence Elks BPOE#65 and also the Pioneers of America. John was a hardworking and generous and will always be remembered for his strong faith and kindness to others. He is survived by his daughter Kathleen Mary Goulette and her husband Michael of Lowell; two sons, John Patrick Toohig of Long beach, CA and Timothy Martin Toohig of Alexandria, VA; one brother Michael of McLean, VA; his sisters, Mary Valcourt of Lawrence, Kathleen McCarthy also of Lawrence, Ann Hickey of Plum Island, Eileen Mueller of Cicero, NY and Sr. Elizabeth Toohig of East Islip, NY. John was the former husband of the late Virginia Leyden Toohig and brother of the late Rev. Timothy E. Toohig, S.J. ARRANGEMENTS: Memorials can be made to The Wounded Warrior Project P.O. Box 758517, Topeka, KS 66675. Visiting hours for family and friends will be held on Wednesday from 4:00p.m, - 7:00p.m. at the Kenneth H. Pollard Funeral Home, Inc., 233 Lawrence Street Methuen, MA 01844. Funeral Mass will be celebrated on Thursday at 10:00a.m. in St. Michael?s Church in North Andover, MA with burial to follow in the Holy Sepulchre Cemetery also in North Andover, MA. For directions or condolences please visit www.pollardfuneralhome.com The Kenneth H. Pollard Funeral Home is honored to assist the Toohig Family with the arrangements.

LAWRENCE ? John J. Toohig, 87, died unexpectedly on October 26, 2013 at his home. Born in Lawrence, MA, the second of eight children if Irish immigrant parents, the late Timothy and Catherine (Walsh) Toohig. He received his education in the... View Obituary & Service Information

The family of John T. Toohig created this Life Tributes page to make it easy to share your memories.