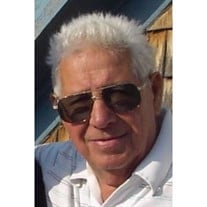 John Thomas Borrelli, 93, of Methuen, passed away on February 2, 2017 surrounded by his loving and devoted family at Holy Family Hospital in Methuen, MA.� John was born and raised in Lawrence, MA to John and Louise (Ciprano) Borrelli. He attended Lawrence City Schools.� After high school, John served in the European theater with United States Army during WWII.� After his discharge from the military, John married his sweetheart Mary Teresa Mawson. He and his wife settled in Lawrence where they raised their family.� John worked for many years as a laborer in the construction industry until his retirement.� He was a humble man known for his good and witty sense of humor who cherished and revered his family.� John could usually be found tinkering around his beach house at Salisbury Beach.� As the patriarch of his family, the touch and presence of his life was a constant reminder of the importance of family. � John was the devoted father to his three children; his daughter, Joanne Peardon and her husband Bruce of Merrimac, MA, his son, John T Borrelli III of Sandown, NH, and his daughter, Barbara Cusick of Danville, NH.� He was the loving grandfather to his five grandchildren; Thomas, Terry, Dawn, Jenna and Jason.� John was the cherished great grandfather to his ten great-grandchildren; Brandon, Alex, Ryan, Nyco, Nikayla, Aiden, Hunter, Jayna, Honour and Hayden.� He is also survived many loving nieces and nephews.� John was preceded in death early in life by his wife, Mary Teresa Borrelli, with whom he shared 15 years of marriage, his son-in-law Thomas Cusick, his daughter-in-law Elaine Greenlaw Borrelli and his seven sisters and four brothers.� In lieu of flowers please make a contribution in John's memory to the Animal Rescue Merrimac Valley, PO Box 8006, Bradford, MA 01835 (www.armv.org). Online condolences can be given at http://www.pollardfuneralhome.com.� The Kenneth H. Pollard Funeral Home is proud to serve the Borrelli family. Visitation will be held Tuesday, February 7, 2017, 4:00 pm - 8:00 pm at Kenneth H. Pollard Funeral Home, 233 Lawrence Street, Methuen, MA.� Friends and family are cordially invited.� A Mass of Christian Burial will be celebrated on Wednesday, February 8, 2017, 11:00 AM St Monica's, 212 Lawrence Street, Methuen, MA.� Per John?s wishes, interment will be private.�

John Thomas Borrelli, 93, of Methuen, passed away on February 2, 2017 surrounded by his loving and devoted family at Holy Family Hospital in Methuen, MA.&#65533; John was born and raised in Lawrence, MA to John and Louise (Ciprano) Borrelli.... View Obituary & Service Information

The family of John T. Borrelli created this Life Tributes page to make it easy to share your memories.

John Thomas Borrelli, 93, of Methuen, passed away on February...