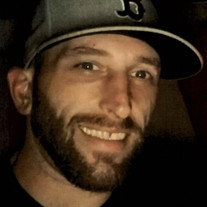 John-Paul Sullivan, 39, of Methuen, former longtime resident of Malden, passed away at home on January 27, 2020. Born on March 30, 1980 in Malden, MA graduating from Malden Catholic with the Class of 1998. Best known by his loved one's as Sully, he was a proud and devoted man who was full of life and love. Sully was a kind and gentle soul who can be described simply as a good man. As a man who lived by many different virtues in his life, his greatest accomplishment was being a father, mentor and teacher to his children. Sully, who knew the value of hard work, worked for many years as an HVAC technician. He was also a devoted Boston sports fan that strove to teach the lessons learned on and off the field to the one’s he loved. Sully touched many lives in many different circles and will fondly be loved, cherished, and missed by all. John is survived by his soulmate Lisa Moore of Londonderry, NH and was the beloved father to his children; Aubrey Sullivan and Sadie Moore, both of Londonderry, and Isabelle Sullivan of Seattle, WA. He is also survived by his parents Paul and Anne-Marie (Tasse) Sullivan, and his sister Patricia Nutton and her husband Timothy all of Methuen. John was the cherished uncle to Angelina, Daylen and Brantley Nutton. He is also survived by Isabelle’s mother Rebekkah Kilroy also of Seattle, WA. Visitation for John will be held on Sunday, February 2, 2020 from 12-4 PM at the Kenneth H. Pollard Funeral Home, 233 Lawrence Street, Methuen. Friends and family are cordially invited to attend. A funeral service will be held at the conclusion of calling hours at the funeral home. In lieu of flowers, please consider donating in John’s memory to the American Foundation for Suicide Prevention (AFSP), 199 Water Street, 11th Floor, New York, NY 10038. The Kenneth H. Pollard Funeral Home is proud to serve the Sullivan family

John-Paul Sullivan, 39, of Methuen, former longtime resident of Malden, passed away at home on January 27, 2020. Born on March 30, 1980 in Malden, MA graduating from Malden Catholic with the Class of 1998. Best known by his loved one's as... View Obituary & Service Information

The family of John-Paul "Sully" Sullivan created this Life Tributes page to make it easy to share your memories.