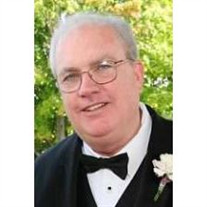 John Paul "Jay" Sylvester passed peacefully on December 18. He was born in Boston on March 3, 1950. Three was his lucky number as he always remarked that he was the "third child born on the third day of the third month." His wife and children threw a surprise party for his birthday on 03-03-03. His parents, Ray and Claire Sylvester raised him and his six rambunctious siblings in a large home in Winchester, Massachusetts. Other important influences in his early life were his Grandfather John Paul Carroll, Uncle Msgr. John P. Carroll and his Aunt Pauline Carroll. This precocious child was educated at St. Mary's, Matingon and the University of Massachusetts Amherst. His summers were spent swimming in Scituate Mass or working as a camp counselor for children with special needs and at Camp Fatima in New Hampshire. By all accounts, he was a loveable rebel.� In 1970, while serving as a skating rink guard his friend set him up on a blind date with a young nurse named Donna Heenan. The two were married in 1973 and went on to a nearly 40-year partnership full of love, laughter and more than one spirited discussion. Together they were loving and attentive parents to their daughter Elizabeth "Beth" and son Sean. Since the birth of his first grandchild Katherine "Katie" in 2008, his main focus in life had been enjoying the antics of three adorable little girls who called him "Papa." Jay had an intellectual curiosity and read a book a day in retirement. American History was a favorite subject and, as a fan of David McCullough, he was know to sometimes correct members of the National Park Service if they missed a fact. He was a communicant at St. Monica's in Methuen, MA and had a deep devotion to the blessed sacrament. He found joy each Friday sharing the vigil at the Perpetual Adoration Chapel. �He was also devoted to in his words was an "oft forgotten" Saint Joseph whom he related to as a father and honorable man. He worked hard to support his family and had several careers in hospitality, finance and customer relations.� Jay's sense of humor was demonstrated by his booming voice and hearty laugh. He was an avid lover of all things sports, especially his beloved New England Patriots for whom he held season tickets for nearly two decades. �He was not a cheesy lover of Patriots clothing but appreciated the finer points of the game and the fact that "Belichick could break down film at age nine." He leaves a grateful but heartbroken family: wife Donna (Heenan) Sylvester, Beth Lynch and her husband Ryan of Weymouth, Massachusetts, Sean Sylvester and his wife Tracy of Holliston MA, three beautiful grandaughters Katherine Sylvester, and Abigail & Hannah Lynch. He also got much joy from his grandogs Stewie and Grady. His siblings include Carol Albiani of Winchester, Robert Sylvester of Marlboro, Terence Sylvester of New Hampshire, Patricia Maloney of Medfield and Paul Sylvester of Parkman Maine. (and the late Ray Sylvester of Scituate.) He was also a devoted Uncle to twenty-one nieces and nephews. Family and friends will gather to honor and celebrate Jay?s life by gathering for his Funeral Mass in St. Monica?s Church, 212 Lawrence St., Methuen on Saturday, December 22, 2012 at 11 AM. Visiting hours in the Kenneth H. Pollard Funeral Home, 233 Lawrence St., Methuen are from 8:30 - 10:30 AM on Saturday. In lieu of flowers please consider a gift to the Salvation Army by visiting salvationarmyusa.org or St. Monica?s Parish, c/o Perpetual Adoration Chapel, 212 Lawrence St., Methuen, MA 01844. For directions or to sign the online guest register visit www.pollardfuneralhome.com or Kenneth H. Pollard Funeral Home on Facebook. The Kenneth H. Pollard Funeral home is honored to assist the Sylvester family with arrangements.

John Paul "Jay" Sylvester passed peacefully on December 18. He was born in Boston on March 3, 1950. Three was his lucky number as he always remarked that he was the "third child born on the third day of the third month." His wife and children... View Obituary & Service Information

The family of John Paul "Jay" Sylvester created this Life Tributes page to make it easy to share your memories.