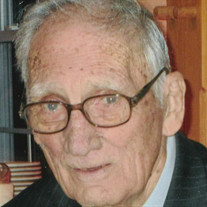 John Donald Ord, 91 of South Lawrence, passed away peacefully on Thursday, November 15, 2018 at the Holy Family Hospital in Methuen. He was the beloved husband of the late Mary L. (Leonard) Ord, with whom he shared 46 years of marriage. Born in Lawrence on October 30, 1927, he was the son of John and Elizabeth (Sheridan) Ord. He graduated from Lawrence High School, class of 1945. He proudly served his country during World War II in the U.S. Navy, having served on the U.S.S. Prairie, the U.S.S. Frontier, and the U.S.S. LST 1078. He worked as a highway state foreman for the Commonwealth of Massachusetts for 44 years until his retirement. He was a communicant and usher at St. Patrick’s Church in Lawrence and a Third-Degree Knights of Columbus in North Andover. John was an avid sports fan of the Boston Red Sox, the New England Patriots, the Boston Celtics, and Boston College Football. He was a season ticket holder for Boston College football for many years and took his sons to many of their games. His greatest joy, however, was spending time with his family, especially his grandchildren and great grandchildren. John will be deeply missed by his 2 sons, John Dennis Ord of South Lawrence and Richard Ord and his wife, Denise of Methuen; 2 daughters-in-law, Karen Ord of Methuen and Frances Ord of Lawrence; 6 grandchildren, Kevin John Ord, Jr. of Worcester, Kristine Giarrusso and her husband, Michael, of Windham, Kathryn Forina and her husband, Anthony, of Methuen, Patrick Ord of Lawrence, Daniel Ord and his fiancé, Diane Luis, of Lawrence, and Kellie Collier and her husband, Mark, of Methuen; 7 great grandchildren, Quinn, Garrity, and Keaton Giarrusso, Delia and Georgia Forina, Cara Ord, and Cameron Collier; his sister, Maureen Voisine of North Andover; and many other dear family members who will miss him greatly. He is predeceased by 2 sons, Kevin John Ord and Barry S. Ord and his brother, Robert Ord. Family and friends will honor and celebrate John’s life by gathering for his calling hours on Sunday, November 18, 2018 from 1 – 5 pm at the Kenneth H. Pollard Funeral Home, 233 Lawrence Street, Methuen. His Mass of Christian Burial will take place on Monday at 11 AM at St. Patrick Church, 118 South Broadway, Lawrence. Burial will follow at Ridgewood Cemetery in North Andover. In lieu of flowers, memorial contributions can be made to Cor Unum Meal Center, 191 Salem Street, Lawrence, MA 01843. To send a condolence to John’s family, please visit www.pollardfuneralhome.com. The Kenneth H. Pollard Funeral Home is honored to serve the Ord family.

John Donald Ord, 91 of South Lawrence, passed away peacefully on Thursday, November 15, 2018 at the Holy Family Hospital in Methuen. He was the beloved husband of the late Mary L. (Leonard) Ord, with whom he shared 46 years of marriage. Born... View Obituary & Service Information

The family of John Donald Ord created this Life Tributes page to make it easy to share your memories.