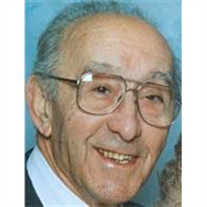 Salem, NH ? John Karamourtopoulos, 91, died November 30, 2009 at the Merrimack Valley Hospice House in Haverhill with his loving wife at his side. Born in Lawrence John was the son of Paul and Zoe (Mastorakis) Karamourtopoulos. He was a graduate of Lawrence High School class of ?1936?, and attended Bentley School of Accounting. For several years John had been employed with Priscilla?s Candies on Essex Street in Lawrence, and for 30 years had worked in the Produce Department with the A&P Supermarket Chain. During World War II he served his country with the 3rd armored division in the United States Army and was honorably discharged at wars end. John was an active member of Sts. Constantine and Helen Greek Orthodox Church of Andover, and served on the Board of Trustees, and was awarded the Metropolis of Boston Laity Award. John was a member of the Salem American Legion Post 63, and a consummate fan of the New York Yankees. A 48 year Salem, NH resident John is survived by his loving wife Roberta E. ?Bobbi? (Patnaude) Karamourtopoulos with whom he would have celebrated 60 years of marriage January 2, 2010. One son Paul J. and his wife Teri Karamourtopoulos of Methuen, and a daughter and son-inlaw Susan C. and Russell Galvin of Plaistow, NH, two sisters Doris Diamond of Lawrence, Anne Coconis and her husband Charles of Methuen, 4 grandchildren Jennifer and her husband Jonathan Muise of Bradford, Ma., Matthew, John Michael and Nicole, 2 greatgrandchildren Mariah, and Madisyn, and many nieces and nephews. John was predeceased by brothers Harry Karamourtopoulos, George Karam, and Charles Karas. Funeral Services will take place on Friday morning at 10 o?clock in Sts. Constantine and Helen Greek Orthodox Church 71 Chandler Road in Andover with burial to follow in Pine Grove Cemetery of Salem, NH. Friends may call on Thursday from 4-7 P.M. at the Kenneth H. Pollard Funeral Home 233 Lawrence Street in Methuen. Memorial contributions may be made to the Merrimack Valley Hospice House 360 North Avenue in Haverhill, MA, 01830.

Salem, NH ? John Karamourtopoulos, 91, died November 30, 2009 at the Merrimack Valley Hospice House in Haverhill with his loving wife at his side. Born in Lawrence John was the son of Paul and Zoe (Mastorakis) Karamourtopoulos. He was a graduate... View Obituary & Service Information

The family of John Karamourtopoulos created this Life Tributes page to make it easy to share your memories.