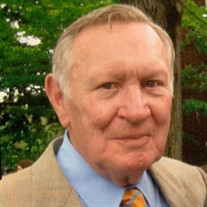 John “Jack” G. Higgins, 89 of Andover and formerly of Osterville. Jack died peacefully on August 10, 2021, surrounded by his loving children. Jack was born in Lawrence to the late John and Madeleine Higgins. He was married to Nancy L. Higgins (MacMillan) for almost 52 years, who predeceased him in 2011. Jack graduated from Cranwell Prep in 1949 and the College of the Holy Cross in 1953, and then enlisted in the U.S. Marine Corp. He proudly served as a 2nd Lieutenant and spent several years in Korea, Japan, and Okinawa as a rifle company platoon leader. After the service, Jack accepted a two year-training class on Wall Street with Merrill Lynch which was the start of a 40-year career in the investment business. After seven years with Merrill Lynch, Jack joined Kidder Peabody, Inc as a salesman and eventually became New England Regional Manager. Along the route, he was also appointed as chairman of the Boston Stock Exchange and a member of the Board of Governors of the NASD. Jack was a lifelong member of St. Augustine’s Parish in Andover, St. Theresa’s in North Reading, and Our Lady of the Assumption in Osterville. He was a member of the Board of Trustees of Holy Cross and served on the Investment Committee for 23 years. He was a board member for the Thyroid Foundation of America and the Schephen’s Eye Research Institute. He was also a competitive golfer and member of Salem Country Club and Oyster Harbors. Jack loved Boston sports and Notre Dame football. Jack had a magnetic personality and a mischievous sense of humor. He was a strong leader who inspired hard work and loyal friendships. He engendered an “esprit de corps” in others. Jack was also predeceased by his brother, James L. Higgins and his wife, Janet, and cousin, Ann H. Bride, all of Andover, as well as his brothers-in-law, Donald J. MacMillan, formerly of Cotuit, and William O’Connell formerly of Saratoga, CA. He is survived by his sister, Carole O’Connor, and her husband, John, of Andover, and Maureen O’Connell of San Jose, CA. Jack will be missed by his children and grandchildren. Father to John G. Higgins and his wife, Betsy, of Dover, MA; Mary Higgins and her husband, John Lechner, of Manchester, MA; James Higgins and his wife, Elke, of Vero Beach, FL; Anne Wakelin and her husband, Jeff, of Andover; Elizabeth Higgins of Lexington; Caroline Higgins of Andover; Margaret Higgins of Lexington; Kathryn Higgins of Andover; and Nancy Dankert and her husband, Peter, of Andover. He was grandfather to John, Peter, and Teddy Higgins; John Lechner, Elisabeth Hutchins, Julia and Duncan Lechner, Matthew Higgins, Petty Officer Christian Higgins, Andrew and Bridget Higgins, Henry and Sam Wakelin; Peter, Katherine, Elizabeth, Thomas Dankert of Andover, and great grandson, Alastair Hutchins. Relatives and friends are respectfully invited to attend visiting hours on Friday, August 13, from 4 to 8 p.m., at Kenneth H. Pollard Funeral Home, 233 Lawrence Street, Methuen, MA 01844. A Mass of Christian Burial will be held Saturday, August 14, at 1pm., at St. Augustine’s Church, 43 Essex Street, Andover, followed by burial at Spring Grove Cemetery, Andover. In lieu of flowers, donations can be made to The Marine Corps Scholarship Fund or Notre Dame Cristo Rey High School, 203 Lawrence Street, Methuen, MA.

John &#8220;Jack&#8221; G. Higgins, 89 of Andover and formerly of Osterville. Jack died peacefully on August 10, 2021, surrounded by his loving children. Jack was born in Lawrence to the late John and Madeleine Higgins. He was married to Nancy... View Obituary & Service Information

The family of John "Jack" Higgins created this Life Tributes page to make it easy to share your memories.

John “Jack” G. Higgins, 89 of Andover and formerly of Osterville....