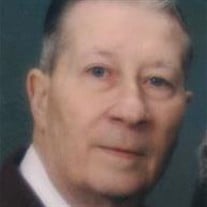 John J. Fitzsimons Jr, 85, of Methuen, passed away surrounded by his devoted family at Holy Family Hospital in Methuen on May 18, 2018. Born to the late John J. and Irene (Lavoie) Fitzsimons Sr. on February 17, 1933, he was raised and educated in Bridgeport, CT attending Central High School. After high school, John enlisted in the US Navy and served in the Pacific Theater during the Korean War. He married his sweetheart on June 12, 1954 at Sacred Heart Church in Bridgeport, CT. He and his wife settled in Methuen to raise their family. John was a lifelong devout Catholic who was a communicant of St. Monica’s Parish in Methuen. He worked for 35 years as a section chief for plant security at Avco Systems until his retirement. John loved many passions from wood working to home improvement, but his main cherished love was music. He was a member of a country band that he devoted many weekends to over the course of 20 years. John touched many lives in many different circles and will fondly be cherished, loved and missed by all. John is survived by his beloved wife of 63 years, Adele (Crook) Fitzsimons of Methuen. He was the father to his son John E. Fitzsimons and his wife Janet of Salem, NH, and his daughter Deborah Gentile of Salem, NH. John was the proud grandfather to his six grandchildren; Jeffrey, William, Joseph, Scott, Adam and Susan. He was also the great-grandfather to 9. John is survived by his sister Anna Mae Conell of Shelton, CT, his brother Ronald Fitzsimons of Trumbull, CT and several nieces and nephews. He was preceded in death by his son-in-law William P. Gentile Sr., his brother Edward Fitzsimons, and his sister Lorrene James. Visitation for John will be held on Wednesday, May 23, 2018 from 4 – 8 PM at The Kenneth H. Pollard Funeral Home, 233 Lawrence St, Methuen. Friends and family are cordially invited to attend. A Mass of Christian Burial will be celebrated on Thursday, May 24, 2018 at 9 AM at St. Monica’s Church, 212 Lawrence St, Methuen. Interment to follow at Pine Grove Cemetery, 329 Main St, Salem, NH. In lieu of flowers, please make a donation in John’s memory to a charity of your own choosing. To leave an online condolence please visit www.pollardfuneralhome.com. The Kenneth H. Pollard Funeral Home is proud to serve the Fitzsimons family.

John J. Fitzsimons Jr, 85, of Methuen, passed away surrounded by his devoted family at Holy Family Hospital in Methuen on May 18, 2018. Born to the late John J. and Irene (Lavoie) Fitzsimons Sr. on February 17, 1933, he was raised and educated... View Obituary & Service Information

The family of John J. Fitzsimons created this Life Tributes page to make it easy to share your memories.