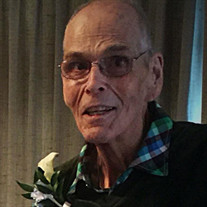 Cote, John Bousie, 80, went home to be with his Lord on Saturday, February 13th, after a courageous two-year battle with pancreatic cancer. John was born on July 21st, 1940 to the late Alphonse and Margaret (Bousie) Cote. He attended Lawrence Public Schools, and was a graduate of Lawrence High School. Realizing the importance of education, John would continue his formal training and graduate from Salem State College with both a Bachelors and Master Degree in Elementary Education. While teaching, he continued to further his education, and earned a Certificate of Advanced Graduate Studies in Library Science, from Boston University. As a result of his teaching, in September 1964, John met the love of his life, Mary Ann Cavallaro, at the Tarbox Grammar School, her first day of teaching there. After a four year courtship, they were married July 6th, 1969, which led to a fifty-one-year marriage. In March of 1974, the Lord blessed them with the adoption of twins, Jennifer and Jonathan. John taught at the Tarbox Grammar School in Lawrence for many years. John also taught in North Andover Public Schools at the Kitteridge Elementary School and also at North Andover Middle School, until his retirement from classroom education. Following this, John worked as a Museum Educator at the Tsongas Industrial History Center, in Lowell, until his retirement in 2006. Following his retirement, John enjoyed a quiet home life. He loved to read, cook and bake. He also enjoyed numerous vacation trips with Mary Ann, from the Hawaiian Islands, to the British Isles, and Russia. He was active at Rockingham Christian Church as an Elder, and facilitated a Food Pantry for many years for the church. John was predeceased by his parents, and his sister Phyllis (Cote) McCarthy, and her husband, John “Mac” McCarthy. John is survived by his wife, Mary Ann (Cavallaro) Cote, his daughter, Jennifer Margaret Cote-Frasca of Derry, NH, his son Jonathan David Cote and partner Dany Smith of Kingston, NH, his grandchildren: Stephen Frasca, Nicolis Frasca, Christopher Frasca, and Caitlin Frasca. He is also survived by nieces Carol Greenfield and her husband Brian of Salem, Joann Proulx and her husband Alan of Salem, Susan Lowe and her husband Frank of Salem, John McCarthy and his wife Cheryl of GA, and Phyllis McCarthy and her partner Diane Carr, of Salem, NH. John was a lover of dogs and cats and will greatly be missed by his beloved Carin terrier, Chloe and his cat, Sadie. A celebration of John’s life will be held at Rockingham Christian Church, in the spring. A family burial will be held for John at Elmwood Cemetery, in Methuen, MA, following his celebration service. For online guestbook, please visit the funeral home website, www.pollardfuneralhome.com. The Kenneth H. Pollard Funeral Home is honored to serve the Cote Family.

Cote, John Bousie, 80, went home to be with his Lord on Saturday, February 13th, after a courageous two-year battle with pancreatic cancer. John was born on July 21st, 1940 to the late Alphonse and Margaret (Bousie) Cote. He attended Lawrence... View Obituary & Service Information

The family of John Bousie Cote created this Life Tributes page to make it easy to share your memories.