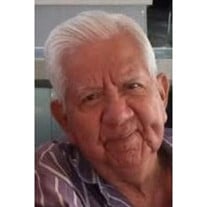 Cleto John Arroyo, 88, of Methuen, formerly of Sugarland, TX, passed away surrounded by his devoted family August 12, 2017 at Holy Family Hospital in Methuen. John, as his friends and family called him, was born to his hardworking parents, Vicente and Anita (Razo) Arroyo in Cuervo, TX on May 27, 1929. As a devout Catholic, he married his sweetheart Mary Olive (Rooney) in a simple ceremony on January 28, 1951 at St Monica?s Parish in Methuen. John felt the call of duty and service and honorably served in the US Army during the Korean War. John was the proud owner of Victory Lumber in Methuen for over 25 years, J & O Sales in Windham for 10 years, and J & O Enterprises in Sugarland, TX for another 10 years. Early in his career, he was a member of Boston Home Builders Association. John was known for being a very humorous person who loved to live life at its fullest. He was the type of man who was very generous to anyone he would meet and tried to make everyone laugh. John had a love for the beach, New England seafood, and especially professional wrestling. Mostly though, he was a deeply committed family man who cherished his wife and three children. John touched many lives in many different circles and will be fondly remembered and missed. John is survived by his beloved wife, Mary, with who he celebrated 66 years of marriage. He is also survived by his three devoted children; his son, John Edward Arroyo and his longtime companion Harriet Duffy of Bradford, MA, his daughter, Jane Marie Danger and her husband Danny of Hartford, MI, and his son Dennis Mark Arroyo of Sugarland, TX. John was the proud grandfather to his three grandchildren, Christine Flanders, John J. Arroyo and Mark A. Arroyo. He was also the great-grandfather of 8. John is survived also by his brother Gregory Arroyo Sr. of Cuero, TX and his sister Timotea Cavazos of Houston, TX. Visitation for John will be held on Thursday, August 17, 2017 from 10 AM ? 12 PM at the Kenneth H. Pollard Funeral Home, 233 Lawrence Street, Methuen, MA. Friends and family are cordially invited. A funeral service will be held at the conclusion of calling hours at the funeral home. Interment to follow at Immaculate Conception Cemetery, 29 Barker Street, Lawrence, MA. In lieu of flowers, please make a contribution in John?s memory to either the Alzheimer's Association Massachusetts/New Hampshire, 309 Waverley Oaks Road, Waltham, MA 02452 or to the Myasthenia Gravis Foundation of America, 355 Lexington Avenue, 15th Floor, New York, NY 10017. The Kenneth H. Pollard Funeral Home is proud to serve the Arroyo family.

Cleto John Arroyo, 88, of Methuen, formerly of Sugarland, TX, passed away surrounded by his devoted family August 12, 2017 at Holy Family Hospital in Methuen. John, as his friends and family called him, was born to his hardworking parents,... View Obituary & Service Information

The family of John Arroyo created this Life Tributes page to make it easy to share your memories.