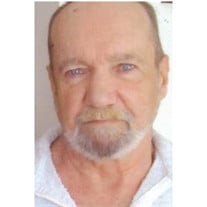 God called another soldier back home. John A. Silvia, 67, of Poland, Maine passed away at home on March 7, 2017. John was born and raised in Newburyport, MA on January 12, 1950 to his loving parents, the late John and Jane (Fogg) Silvia. After growing up on the Massachusetts shore, John felt the call of patriotism at an early age. Much to the dismay of his parents, he enlisted in the United States Army at the tender age of 17. John was a highly decorated Vietnam combat veteran . In addition, he also received the Purple Heart on November 18, 1968 for wounds sustained during combat operations. After his discharge from the military in 1972, John eventually settled in Poland, Maine. For his service to the country, John was recognized by the State of Maine receiving a Silver Star Service Medal for Honorable Service. He worked for many years as a maintenance worker. John struggled with the rigors of combat, thus sending him on many avenues in his life. He worked in many differing fields and overcame tremendous adversities. At a later point in his life, John graduated college after a period of homelessness. As a disabled veteran, John advocated for those suffering with Post Traumatic Stress Disorder as an active member with the Disabled American Veterans. Additionally, he was a man of such devoted character that he never refused to lend a helping hand to those who were less fortunate than himself. John worked for many years with the homeless in Portland, Maine championing for those individuals to have a better life. John was a man known for the uncanny ability to build and create things with his hands. He was also a man of many talents. John was a highly talented artist. He also had the ability to tear apart an engine and rebuild it in his driveway. In addition, John loved to tinker with home improvement projects. He was a man that displayed the remarkable trait of patience. John was an easygoing man who was very reserved, honest, kind and had a deep understanding of human nature. He was a man who was devoted to his family and will be truly missed. John is survived by his two loving children; his son, Christian and his wife, Taralyn Silvia of Fall River, MA, and his daughter, Cassandra Silvia-Spencer and her husband Sam Spencer of Somerville, MA. He was the devoted grandfather to his two granddaughters, Amanda Silvia and Willa Spencer. Additionally, John was the cherished brother to his sister, Irene McGuire of Haverhill, MA. He is also survived by several nieces and nephews. In addition to being preceded in death by his parents, John was preceded in death by his brother-in-law, William McGuire. Visitation for John will be held Thursday March 16, 2017 from 10-11 AM at the Kenneth H. Pollard Funeral Home, 233 Lawrence Street, Methuen, MA. Friends and family are cordially invited to attend. A funeral service will be held immediately after visitation. Interment will take place in the St. Mary-Immaculate Conception Veteran's Lot, 29 Barker Street, Lawrence, MA. Online condolences can be given at http://www.pollardfuneralhome.com. The Kenneth H. Pollard Funeral Home is proud to serve the Silvia Family.

God called another soldier back home. John A. Silvia, 67, of Poland, Maine passed away at home on March 7, 2017. John was born and raised in Newburyport, MA on January 12, 1950 to his loving parents, the late John and Jane (Fogg) Silvia.... View Obituary & Service Information

The family of John A. Silvia created this Life Tributes page to make it easy to share your memories.