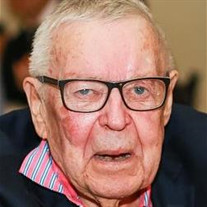 “You can’t mix water and sugar and get instant family” John A. Carney Jr., (Jack), went to be with the Lord, Wednesday June 20th 2018, surrounded by family. Jack lived in San Antonio, with his daughter, Kathy and her family. He was born in Lawrence, Massachusetts in 1932 to his beloved parents John and Helen Carney (Shay). Jack attended Central Catholic High School, and went on to graduate from Merrimack College. He earned an advanced degree in Chemistry from the College of the Holy Cross. Our “people mechanic” was a sales executive with Shell Chemical Company for over 35 years. His distinguished career moved Jack and the family from the New England to Houston, Texas several times. Finally, settling in his favorite hometown of Doylestown, Pennsylvania in the late seventies. Jack’s generous spirit and sage advice will be sorely missed by his entire family. He was a devoted Catholic who was a passionate Boston sports fan. His greatest love was for his large, over 40 member’s strong, family who were the center of his world. Jack loved nothing more than big, boisterous, gatherings with all Gram’s signature dishes and retelling of our old cherished family stories even though his constant claim was, “I can’t keep an audience.” Jack was preceded in death by his beloved wife of 56 years Jean Marie. He was the loving father of six children Kathy,(Bob) Jack (Kathleen), Ellen, Tom (Laura) Linda (Mike) Mary Lou (Barry). Jack enjoyed spending time with his thirteen grandchildren and eleven great grandchildren. He loved being “Uncle Jack” to all the Neels. He never forgot his “up country” roots and his love for his extended family the Regans. He enjoyed life-long friendships with his brother –in- law Dick and Tony Fragala whom he met at Merrimack. Jack and Jean never met a stranger. Their home was open, warm and welcoming to all. Visitation for Jack will be held on Thursday, June 28, 2018 from 4-8 PM at the Kenneth H. Pollard Funeral Home, 233 Lawrence Street, Methuen. Friends and family are cordially invited to attend. A Mass of Christian Burial will be celebrated on Friday, June 29, 2018 at 11 AM at Saint Monica’s Parish, 212 Lawrence Street, Methuen. Inurnment will be held on Monday, July 2, 2018 at 10 AM at Saint Mary Immaculate Conception Cemetery, 29 Barker Street, Lawrence. In lieu of flowers, please make a contribution in Jack’s memory to Central Catholic High School, 300 Hampshire St, Lawrence, MA 01841 in the name of the Jean Marie Carney Endowment. To leave an online condolence, please visit www.pollardfuneralhome.com. The Kenneth H. Pollard Funeral Home is proud to serve the Carney family.

The family of John A. "Jack" Carney Jr. created this Life Tributes page to make it easy to share your memories.

“You can’t mix water and sugar and get instant family”