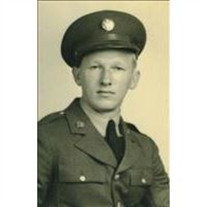 John A. Budenas, 96 of Methuen passed away from natural causes on February 23, 2015 surrounded by his loving family. John was born on March 22, 1918 in Worcester to the late Anthony and Placidia Budenas. During the Great Depression, at a young age, he traveled on his own throughout the Midwestern States. Shortly, after his return home to Lawrence, John enlisted with the Civilian Conservation Corps (CCC) and worked in the logging camps in Colorado. During his time with the CCC he worked in Wyoming building dams for the farmers and the ranchers. Following John?s career with the Civilian Conservation Corps, in 1941 he was one of the first draftees from Lawrence into the United States Army. During WWII, John fought in every major Allied offensive battle in Europe from the Invasion of Normandy across the continent including the largest American battle at Bastogne (Battle of the Bulge). On two separate occasions, showing great compassion John Budenas took prisoners without firing a single shot. His service in Europe included Iceland, France, Belgium and Germany. After WWII, John returned home to work at the Arsenal in Watertown, MA for the United States Army. He started out as a machine operator, he worked his way up to master machinist. While at the Arsenal, John worked on the project to put the first American in Space (Allen B. Sheppard). Upon closure of the Arsenal, in the early 1960?s he transferred to the United States Navy working as a master machinist overhauling US warships at the Boston Naval Shipyard. Subsequent to the closure of the Boston Naval Shipyard, he worked for the Boston-Maine Railroad Company overhauling diesel locomotives. John also worked for several machine shops as a master machinist. In his late 70?s he worked as a security guard at various facilities throughout the Merrimack Valley. John worked until his 80th birthday, his motto was always ?Never stop working?. His hobbies included woodworking, boat building, enjoying fine meals, and regular trips for coffee and donuts. John enjoyed the faithful and loyal companionship of his dog Karzan. John was the beloved husband of the late Agnes (Najem) Budenas with whom he shared 59 years of marriage. He was the devoted father of Priscilla Field and her husband Ray H. of Methuen, John M. Budenas and his wife Nancy of Townsend and Robert L. Dean and his wife Leona of Salem, NH. John was the dear brother of the late Helen Fisher. He is also survived by 13 grandchildren, 16 great grandchildren and many nieces and nephews. Friends and guests are invited to call on Friday, February 27, 2015 at the Kenneth H. Pollard Funeral Home, 233 Lawrence St. Methuen at 10:00 AM until 12:00 Noon. A funeral service will be held at the funeral home immediately following the calling hours beginning at 12:00 Noon. Interment to follow at the St. Mary?s-Immaculate Conception Cemetery of Lawrence. For directions and online guestbook, please visit the funeral home website, www.pollardfuneralhome.com. The Kenneth H. Pollard Funeral Home is honored to serve the Budenas Family.

John A. Budenas, 96 of Methuen passed away from natural causes on February 23, 2015 surrounded by his loving family. John was born on March 22, 1918 in Worcester to the late Anthony and Placidia Budenas. During the Great Depression, at a young... View Obituary & Service Information

The family of John A. Budenas created this Life Tributes page to make it easy to share your memories.

John A. Budenas, 96 of Methuen passed away from natural causes...