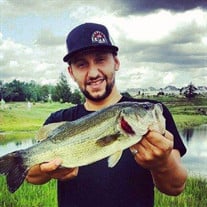 Joel Christopher Gigliotti, 31, of Salisbury, Ma, formerly of Methuen, passed away suddenly on May 7, 2019 in Manchester NH. Born on January 15, 1998 in Methuen, MA, he attended Methuen High School graduating with the Class of 2006. After high school, Joel attended Johnson and Wales majoring in culinary arts. Joel was a devoted family man, who was the light of his daughter’s eyes. He worked as a poker dealer, at various Poker rooms recently at Chasers, in Salem NH. He was well known in the Poker community! It was his passion and everyone who he either dealt cards to or played cards with loved him. A man who could make anyone laugh he loved all things musical, Joel was a passionate singer and guitarist and recorded music and did shows with Prospect Hill. He recently took his baby fishing which was his next passion. Joel touched an incredible amount of people in many different circles and was fondly loved and cherished and will be sorely missed by all. A HUGE personality with an unbelievable heart and soul always willing to help anyone in need or just make them laugh. He left a huge void! Joel is survived by his beloved parents; Virginia Gigliotti of Methuen, and Joseph Gigliotti of Haverhill. He was the proud father to his daughter, Aliyah Rose Gigliotti. She brought him true and pure happiness and they shared an unbelievable bond. He was the brother of Marc Gigliotti and his wife Jessie of Middleton, MA. Joel was the cherished uncle and Godfather to his nephew, Jackson, and his niece, Addison. He is also survived by many cousins; Justin and Alyssa Antone, Emily Terry, Evan Antone, Neil Kelleher, Ryan Kelleher, Evan Kelleher, Harrison Gigliotti and Douglas Gigliotti and Kayla Davis. Friends and family will warmly be received for visitation on May 11th from 11-3 at the Kenneth H. Pollard Funeral Home, 233 Lawrence Street, Methuen. A funeral service for Joel will be held at the conclusion of calling hours. The Kenneth H. Pollard Funeral Home is proud to serve the Gigliotti family. In lieu of flowers please consider a donation in his daughter’s honor payable to: Aliyah Rose Gigliotti Trust. Donations Can Be Mailed to: Virginia Gigliotti PO Box 5683 Salisbury, MA 01952

Joel Christopher Gigliotti, 31, of Salisbury, Ma, formerly of Methuen, passed away suddenly on May 7, 2019 in Manchester NH. Born on January 15, 1998 in Methuen, MA, he attended Methuen High School graduating with the Class of 2006. After... View Obituary & Service Information

The family of Joel Christopher Gigliotti created this Life Tributes page to make it easy to share your memories.