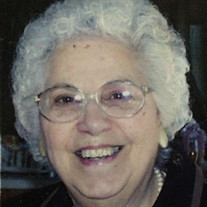 Joan M. (Assaf) Healey, 88 of Methuen, passed away on January 3, 2019 at the Prescott House in North Andover. She was the beloved wife of the late Joseph Healey. Born in Methuen on April 6, 1930, she was the daughter of James and Anna (Kadra) Assaf. She graduated from Searles High School in Methuen and worked at the Internal Revenue Service in Andover and Methuen for over 20 years, until her retirement in 1993. Joan was an avid tennis, golf, and Red Sox fan and enjoyed watching her sons play golf in local tournaments for many years. She was a fixture around the course at most every Alan B. Rogers Memorial Tournament and was known to most of the participants. She also enjoyed Bingo and playing cards with her friends; and taking the occasional trip to Foxwoods and Rockingham Park to play poker. Most of all, she loved spending time with her family, especially being Grammy to her grandchildren, and making them her famous grape leaves and “special” chicken soup. Joan will be deeply missed by her 2 sons, James J. Healey and his wife, Laurie of Salem, NH and Paul Healey and his wife, Cheryl of North Andover; her sister, Rose Lahage of Methuen; 4 grandchildren, Christopher, Brendan, Morgan and Taylor; and several nieces and nephews. She was predeceased by her son, Joseph Healey. Joan’s family would like to express their gratitude to the nurses and staff of the Prescott House and Compassus Hospice for the care and compassion they provided during Joan’s time at the nursing home. Their kindness and love made her feel like family. At Joan’s request, services will be private. In lieu of flowers, memorial contributions can be made to the Alzheimer’s Association, 480 Pleasant Street, Watertown, MA 02472. To send a condolence to Joan’s family, please visit www.pollardfuneralhome.com. The Kenneth H. Pollard Funeral Home, 233 Lawrence Street, Methuen is honored to serve the Healey family.

Joan M. (Assaf) Healey, 88 of Methuen, passed away on January 3, 2019 at the Prescott House in North Andover. She was the beloved wife of the late Joseph Healey. Born in Methuen on April 6, 1930, she was the daughter of James and Anna (Kadra)... View Obituary & Service Information

The family of Joan M. Healey created this Life Tributes page to make it easy to share your memories.