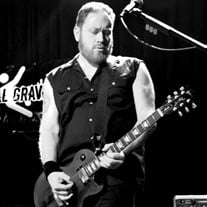 Jason C. Kenny, age 36 of Manchester, NH and formerly Littleton, MA, passed away suddenly on Thursday November 22, 2018. He was born in Southampton, NY on February 2, 1982. Jason attended Littleton Public Schools, playing in both Littleton Youth Baseball and Pop Warner football leagues. He attended Francis Parker Charter School, Class of 2000. Those who love him feel Jason’s loss tremendously. He was a giant in both stature and in heart, and his compassion, kindness, and gentle nature will never be forgotten. Jason was a musician at his very core; finding rhythm and complexities in even the simplest of songs. He was a member of numerous bands including Crevice, Diesel, One Track Mind, and most recently playing rhythm guitar and providing back-up vocals for Casual Gravity. His talent, personality, and infectious energy shone when he was on stage with his Casual Gravity brothers, Mark, Tom, Jeff, and Anthony; Jason was their rock. Jason is survived and cherished by his loving Mom and Dad, Tara and Chris Kenny, both of Littleton, MA; his Mate Alicia Kenny of Marlboro, MA; his Person and Partner Kelly Lyons, of Manchester, NH; his bun Gimli and pup Oakley. He is also survived by Aunt and Uncle, Jane and Charles Bernheim of Highland Park, NJ; Uncle and Aunt, Peter and Anne Kenny of Deland, FL; and Cousins Sebastian and Joshua Bernheim of NJ, and AnnMarie Davis of Florida. A celebration of life will be held on Sunday, December 2nd, 2018 from 2pm-5pm at the Littleton VFW on 21 Taylor St in Littleton, MA for family and friends.

The family of Jason Kenny created this Life Tributes page to make it easy to share your memories.