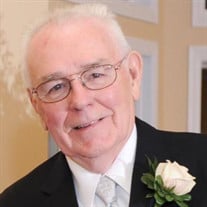 James Francis Judge, 94, died peacefully with his loving family by his side at High Pointe House in Haverhill on November 27, 2021 after a valiant struggle with Alzheimer’s Dementia. He was the devoted husband of the late Rita (Lawrence) Judge for 69 years. James was born in Boston to James F. Judge and Ursula Judge Henrick on August 14, 1927. The family then moved to Lawrence where he was raised and educated. It was here, as a teenager, he met and fell in love with Rita. From that point on they were inseparable life partners. As did most members of the Greatest Generation, James enlisted in the Army at 18, and within two years attained the rank of Tech Sergeant. He was extremely proud of his military service, and especially of the fact that all four of his brothers also served in the military. After the service, James returned home to be with his now wife Rita, and together they grew as a family, raising three children and devoting themselves to their care and upbringing. For most of his life, James would work six days a week to support his family. For 25 years he was employed in the textile industry where he advanced from a line laborer to shop superintendent. When the industry moved south, he joined Raytheon for the next 20 years in Supply Chain Quality Operations. Family was first and foremost in his life, but his second passion was woodworking. A self-taught master craftsman, he would spend hours in his workshop crafting furniture or helping his family improve, renovate, and even build their homes. There was literally no trade he was unable to master. James is survived by his children, Barbara Schroeder and her husband Edward of Windham, N.H., Daniel and Cathleen Judge of Dracut, and Nancy and Conrad Karcz of Dracut, Grandchildren Scott Schroeder of Dawsonville, GA, Kristen Schroeder Channen and her husband Russell of Methuen, Bre Judge McCarthy and her husband Michael of Andover, Dannah Judge Foresta and her husband Paul of Dracut, Timothy Karcz and his wife Jessica Sullivan of Arlington, Shane Karcz and his wife Amy of Reading, and Katelyn Karcz of Lawrence. He was predeceased by his grandson, Lt. Col. Sean Judge, USAF. He is also survived by 13 great-grandchildren, many cherished nieces and nephews, and his dear sister-in-law, Mary Henrick of Methuen. In addition to his wife and grandson, James was predeceased by his four brothers, Daniel S. Judge, George Henrick, Kenneth Henrick & Joseph Henrick and his and Rita’s closest friends, brother-in-law and sister-in-law William and Eileen Ivers. Our Dad lived his life by two words – love and family and led by his wonderful example. We, his family, will always carry on his legacy. The family would like to extend its sincere thanks to Donna Lambert of Grace Morgan House and to the staff at High Pointe House in Haverhill for their care and compassion. Friends and guests are invited to call on Monday, December 6, 2021 from 4:00 PM until 8:00 PM at the Kenneth H. Pollard Funeral Home, 233 Lawrence St. Methuen. A Mass of Christian Burial will take place on Tuesday, December 7, 2021 at 11:00 AM at Our Lady of Good Counsel Parish-St. Theresa’s Church, 22 Plymouth St. Methuen. Interment and military honors to follow at Immaculate Conception Cemetery of Lawrence. In lieu of flowers, James had requested that donations be made in his memory to the Lt. Colonel Sean M. Judge Memorial Scholarship in Military History at the Ohio State University Foundation, 1480 West Lane Ave., Columbus, Ohio 43221. Website https://www.giveto.osu.edu/makeagift/OnlineGivingDonation.aspx?fund=643504 For directions and online guestbook, please visit the funeral home website, www.pollardfuneralhome.com. The Kenneth H. Pollard Funeral Home is honored to serve the Judge Family.

James Francis Judge, 94, died peacefully with his loving family by his side at High Pointe House in Haverhill on November 27, 2021 after a valiant struggle with Alzheimer&#8217;s Dementia. He was the devoted husband of the late Rita (Lawrence)... View Obituary & Service Information

The family of James F. Judge created this Life Tributes page to make it easy to share your memories.