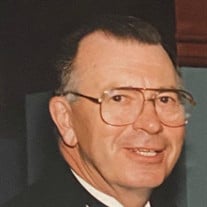 James, F. Jordan, Jr., age 83, passed away peacefully Tuesday, August 31, 2021, surrounded by his loving family at his home in Portsmouth, NH. He was born in Lawerence, MA, on October 27, 1937, son of the late James F. Jordan, Sr. and Lucy Jordan (Perry). He was raised and educated in Lawrence, MA and graduated from Central Catholic High School in 1954. He received a Bachelor’s degree from Merrimack College in 1958 and years later, after starting his family, James received his Master’s degree from Salem State. He worked as an educator and was an assistant principal for North Intermediate School and Principal for West Intermediate School in Willmington, MA until his retirement in 1997. On August 5, 1961, he married Sally Jordan (Young), together they had 5 children and raised them in Methuen, MA. Both educators in the state of Massachusetts school systems, they spent their well-earned retirement splitting their time in Barrington, NH and Zephyr Hills, FL. They were married for 38 years until her untimely death in 1999. Jim was a devoted father and grandfather who loved spending time with his family. He was an avid golfer, impressively scoring a hole in one not once, but three times during his retirement. For the past 14 years he would spend winters in San Antonio, FL and summers in Portsmouth, NH with his companion, Joanie. His kind heart and great sense of humor was evident in his love of a great story or joke and his innocent teasing that was followed with a quick wink. Whether going on a boat ride at sunset or telling stories of summers on Pawtuckaway Lake, his love of being on the water was contagious and passed on to all of his grandkids. Lovingly called “Grampy”, he was the embodiment of the traditions that continue to bind us all together today and the treasured memories we will cherish. He will be greatly missed and is survived by many who loved him dearly including his companion, Joan Walton Sanborn, of Portsmouth, NH, his children, James and his wife, Marcy, of Pittsburgh, PA, Christopher and his wife, Elisa, of Methuen, MA, Michael and his wife, Stacey, of Saco, ME, Marc and his wife, Kelley, of Barrington, NH and Jennifer and her husband, Tim, of Biddeford, ME, his 12 grandchildren, Sarah Mailhott (Jordan) and her spouse, Marc, Natalie Jordan, Danielle Jordan, Kellen Jordan, Julia Robb, Taylor Jordan, Daniel Jordan, Aidan Jordan, Meaghan Jordan, Michael Jordan, Jr., Sally McGrath and Kailey McGrath, his brothers, Kevin Jordan and Joseph Jordan, sisters, Lucy-Anne Oeser, Kathleen Killilea, Patricia Harris, Elizabeth Daher and Eileen Aufiero and brother-in-law, Nick Young, and cousins, John and Helen Spanks. He was predeceased by eldest sister, Marie Heffron. His large Irish family gave him many beloved nieces and nephews, as well as friends who became like family through the years. A Celebration of Life will take place Wednesday, September 8, 2021 at the Kenneth Pollard Funeral Home, 233 Lawrence Street, Methuen, MA 01844 with visiting hours from 9:00 AM until 10:30 AM with a Mass of Christian Burial immediately following calling hours beginning at 11:00 AM at Saint Monica’s Parish, 212 Lawrence Street, Methuen, MA with burial following at the Immaculate Conception Cemetery in Lawrence, MA. The family of Jim would like to thank Beacon Hospice of Portsmouth, NH. If family and friends so desire, donations can be made in Jim’s name to The Beacon Hospice of Portsmouth, NH, 25 New Hampshire Avenue Suite 272, Portsmouth, NH 03801. For online directions and online guestbook, please visit the funeral home website, www.pollardfuneralhome.com. The Kenneth H. Pollard Funeral Home is honored to serve the Jordan Family.

The family of James F. Jordan Jr. created this Life Tributes page to make it easy to share your memories.