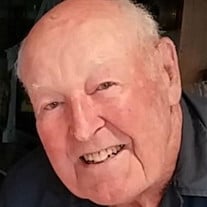 James Bateson Jr, 89, longtime resident of Andover, passed away April 2, 2018 at the Merrimack Valley Hospice House in Haverhill. James, born at home on June 24, 1928 to his hardworking immigrant parents, the late James Sr. and Eliza (Smith) Bateson, attended Andover schools his entire life. He graduated from Punchard High School with the Class of 1946. Several years after graduating from high school, James served honorably in the US Army during the Korean War. After his discharge from the service, he married the love of his life, Mary, on April 18, 1954 in St. Lawrence’s Church in Lawrence. He and his wife settled in Andover to raise their family. A very selfless and generous man, James believed wholeheartedly in doing three good deeds a day. Jim had a love for swimming, gardening, and building things with his hands. He built his parents a home from the ground up and built things to surprise his children, such as homemade sleighs or lawn ornaments for the holidays. He was a Freemason who belonged to the St. Matthew’s Lodge. James founded Bateson Enterprises, Inc. and worked as a general contractor until his retirement. He touched many lives in many different circles and was a much loved man who will be surely missed by all who knew him. James is survived by his beloved bride, Mary K. (O’Donnell) Bateson, with whom he celebrated 64 years of marriage. He is also survived by his six devoted children: his son Neil Bateson and his wife Cindy, his daughter Maureen Barenboim and her husband Jim, his daughter Laurie Bateson, his son Todd Bateson and his wife Pat, his daughter Tammy Barry and her husband Steve, and his son Shaun Bateson. James was the proud grandfather to his 10 grandchildren and great-grandfather to 7. He is survived by his brother-in-law Loring Batchelder, his sister-in-law Teresa O’Donnell and several nieces and nephews. James was predeceased by his sister Eleanor Batchelder. Visitation for James will be held on Thursday, April 5, 2018 from 4 -7 PM at The Kenneth H. Pollard Funeral Home, 233 Lawrence Street, Methuen. Friends and family are cordially invited to attend. A funeral service for James will be held on Friday, April 6, 2018 at 11 AM at the funeral home. The funeral service will conclude with military honors. In lieu of flowers, please make a contribution in James’ memory to the Merrimack Valley Hospice House, 360 North Avenue, Haverhill, MA. To leave an online condolence, please visit www.pollardfuneralhome.com. The Kenneth H. Pollard Funeral Home is proud to serve the Bateson family.

The family of James Bateson Jr. created this Life Tributes page to make it easy to share your memories.