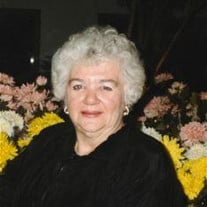 Jacqueline Stanley, 89, a longtime resident of Methuen for over 40 years, passed away on October 25, 2017 peacefully at her home surrounded by her loving family. Jacqueline was born to her hardworking parents Thomas and Mary (O’Leary) Courtney on January 18, 1928 in Lawrence, MA. Raised and educated in Lawrence, she attended St. Mary High School graduating with the Class of 1946. After high school Jacqueline attended the McIntosh Business School. She worked for Western Electric as an inspector for 30 years until her retirement. Jacqueline enjoyed spending time with her friends and socializing. She also enjoyed her weekly bowling games, playing cards, line dancing and watching classic movies. Jacqueline was an advocate for those who were less fortunate than her and was deeply involved with the Special Olympics. She was a woman who was truly devoted to her family and will always be cherished, loved and missed by all. Jacqueline was the devoted mother to her five children; her son, John Stanley and his wife Susan of Londonderry, NH, her daughter, Cynthia Couture and John James of Alabama, her daughter, Shevawn Fountain and her husband Dennis of Methuen, her daughter, Maura Kosrofian and her husband Howard of Wellesley, MA and her beloved daughter, Julie Stanley of Danvers, MA. She was the beloved grandmother to her five grandchildren; Shawn Bellerose and his wife Amy, Darren Stanley, Jillian Allen and her husband Geoffrey, Rory Finno and his wife Deborah and Craig Finno and was also the proud great-grandmother to her five great-grandchildren. Jacqueline is also survived by many nieces and nephews. In addition to her parents, Jacqueline was preceded in death by her brothers, the late Thomas G. Courtney and his surviving wife Barbara, and the late Bernard Courtney and his late wife Ilene. Friends and family are cordially invited to attend calling hours for Jacqueline on Sunday, October 29, 2017 from 12-3 PM at the Kenneth H. Pollard Funeral Home, 233 Lawrence Street, Methuen. All other services are private. To honor Jacqueline’s wishes, please do not send flowers and make a donation in her memory to the Hogan Regional Center, 450 Maple St, Danvers, MA 01923. To leave an online condolence please visit www.polardfueralhome.com. The Kenneth H. Pollard Funeral Home is proud to serve the Stanley and Courtney families.

Jacqueline Stanley, 89, a longtime resident of Methuen for over 40 years, passed away on October 25, 2017 peacefully at her home surrounded by her loving family. Jacqueline was born to her hardworking parents Thomas and Mary (O&#8217;Leary)... View Obituary & Service Information

The family of Jacqueline Stanley created this Life Tributes page to make it easy to share your memories.

Jacqueline Stanley, 89, a longtime resident of Methuen for over...