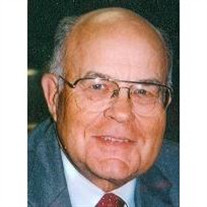 West Hartford, CT- Jack L. Flint, 85, died peacefully after a short illness, Sunday, November 21, 2010 at the Salem Haven Nursing Center in Salem , NH, surrounded by his daughters and their families. Born in Richmond, Virginia, Jack was the son of James H. and Ruth (Wingo) Flint and the beloved husband of 61 years to the late Alice (Smith) Flint. Jack was a pilot in the USAF. After graduating from the University of Richmond, he worked for Travelers Insurance Company, first in Richmond, then in Louisville, KY, and then in Hartford, CT, from which he retired. Upon moving to West Hartford in 1965, Jack became a member of the West Hartford Methodist Church where he served as Pastor-Parish Chairperson and Financial Secretary. Always an avid golfer, Jack played over 100 rounds of golf a year, winning many tournaments, including the Senior-Senior Championship at Rockledge Golf Course. On Aug. 30th 1980, he scored a hole-in-one on the 8th hole as well as his best round ever of 72. Bowling and Bridge were his other passions. Jack is survived by his two daughters, Jacalyn Carroll and her husband William of Salem,NH and Frances Fay and her husband Richard of Newbury,MA. Jack is also survived by his five grandchildren, Ryan Carroll and his wife Kim of Salem,NH, Jonathan Carroll and his wife Julie of Melrose, Jillian Carroll of Salem, NH, John Shearer and his wife Stefania of Newburyport,MA, and Austin Fay of Newbury, MA. He was also the proud great-grandfather of Abigail and Jack Carroll of Salem,NH. ARRANGEMENTS: A Memorial Service for Jack will be held on Sunday December 12, 2010 at 2PM at the West Hartford Methodist Church, 1358 New Britain Ave, West Hartford, CT. In Lieu of flowers donations may be made to the West hartford Methodist Church. Arrangements are under the direction of the Kenneth H. Pollard Funeral Home 233 Lawrence St., Methuen, MA www.pollardfuneralhome.com

The family of Jack L. Flint created this Life Tributes page to make it easy to share your memories.