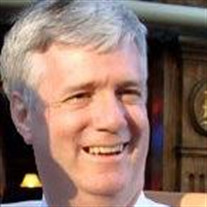 Hugh K. Doherty Jr., 55, of Dorchester, died unexpectedly on March 29, 2018. He is survived by his beloved children, Alissa Doherty and Jack Doherty of Boston. Born on April 18, 1962, Hugh graduated from Concord Carlisle High School in 1980. He held a deep love for the ocean and spent ten years working on fishing and sailing boats on Cape Cod. He went on to receive his degree in nursing from Cape Cod Community College and his masters in biology from UMass Boston. As a hospice nurse, his gift of profound empathy brought comfort to the many families he served. He forged a new career path in the sciences later in life, graduating at the top of his class and receiving “The Biology Program Award for Outstanding Achievement” at UMass Boston in 2008. Hugh had a deep devotion to the Catholic faith which inspired his volunteer work with Mother Teresa’s Missionaries of Charity in the last decade of his life. He served in Dorchester’s women and children’s shelter in many capacities, forming close friendships with the sisters and volunteers he worked alongside there. With the Missionaries of Charity, he traveled in service to New York, Washington DC, and Calcutta, India. A lifelong adventurer, Hugh joined his children on many hikes, climbs, and ski trips in Maine and New Hampshire. In 2013, he thru-hiked the Appalachian Trail from Mount Katahdin in Maine to Maryland; he was known to friends by the trail name, Koozie Cap. He is preceded in his death by his mother and father, Millicent and Hugh Doherty Sr and brother, Michael J. Doherty. He leaves behind treasured friends Mary Joseph of Brighton and former wife, Teresa Foley of Centerville. In addition, Hugh leaves behind his siblings Anne Doherty and Michael Williams of Marlborough, Sheila DePuydt and her husband Joseph of Salem, NH, Sean E. Doherty and his wife Karen of Firestone, Colorado, Joseph T. Doherty of Arcata, CA, Kathleen McMurray of Middlebury, VT, Siobhan Smith and her husband Jonathan of Maynard. Relatives and friends are invited to gather for a visitation on Thursday, April 5, 2018 from 9:00 AM until 11:00 AM at the Kenneth H. Pollard Funeral Home, 233 Lawrence St, Methuen. A Mass of Christian Burial will be held immediately after at St. Monica Parish, 212 Lawrence St, Methuen, MA 01844. Interment will be private. In lieu of flowers, donations in Hugh’s memory may be made to the Missionaries of Charity at 74 Richmond St, Dorchester Center, MA 02124. The Kenneth H. Pollard Funeral Home is honored to serve the Doherty Family.

The family of Hugh K. Doherty Jr. created this Life Tributes page to make it easy to share your memories.