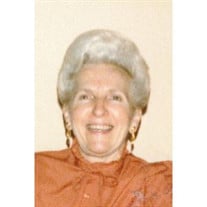 Helen W. Mistal, 100 of Methuen, passed away surrounded by her family on January 1, 2017 at the Nevins Nursing and Rehabilitation Center in Methuen. Helen was born October 30, 1916 at home to her parents, Franciszek and Jozefa (Parternak) Wojtaszek. Born and raised in Lawrence, she graduated from Lawrence High School with the Class of 1934. Helen married her sweetheart, the late Frank Mistal, on May 26, 1935 at the Holy Trinity Church in Lawrence, eventually settling in Methuen in the early 1940?s. She was employed alongside her husband for many years as the office manager for the Frank J. Mistal Heating and Oil Company. Known as the devoted matriarch of her family, Helen loved to spend time with her grandchildren and great grandchildren. She had a love for dancing, especially to polka music and was a devout member of the Sound Abouts Fan Club. Helen enjoyed many different hobbies to include cooking, baking, sewing, crafts and had a love of the great outdoors. She was happy throwing a line in the lake or bowling a few frames at the local bowling alley. Helen even had her fifteen minutes of fame as a coveted member of the Baker?s Dozen at the Nevins Nursing Home. Helen?s life touched many people. Helen was the devoted mother to her daughter Geraldine Bergeron and her husband Alfred of Haverhill. She was the cherished grandmother to Frankie Mistal of Salem, NH, Linda Mistal of Methuen, Alfred Bergeron Jr. of Methuen, Maryann Dubay and her husband Carl of Windham, NH and Cheri Bann of Sandown, NH. She was the beloved great grandmother to Kyle, Cole, and Brad. Helen was predeceased by her son Frank Mistal Jr. and his wife Loretta. Visitation for Helen will be held Wednesday, January 4, 2017 from 2-5 PM at the Kenneth H. Pollard Funeral Home, 233 Lawrence Street, Methuen, MA. Friends and relatives are cordially invited. A funeral service will be held on Thursday, January 5, 2017 at 10 AM at the funeral home. Interment to follow at the Bellevue Cemetery, 170 May Street, Lawrence, MA. In lieu of flowers, please make a contribution in Helen?s name to the Nevins Nursing and Rehabilitation Center, 10 Ingalls Court, Methuen, MA 01844. Online condolences can be given at http://www.pollardfuneralhome.com. The Kenneth H. Pollard Funeral Home is honored to serve the Mistal Family.

Helen W. Mistal, 100 of Methuen, passed away surrounded by her family on January 1, 2017 at the Nevins Nursing and Rehabilitation Center in Methuen. Helen was born October 30, 1916 at home to her parents, Franciszek and Jozefa (Parternak)... View Obituary & Service Information

The family of Helen Mistal created this Life Tributes page to make it easy to share your memories.

Helen W. Mistal, 100 of Methuen, passed away surrounded by her...